Yayoi Hanawa (花輪 やよい, Hanawa Yayoi) is a new tour character that debuted in the Data Carddass Aikatsu! 2016 Series 1st Collection and Season 4 of the anime. She is a student from Komachi Girls' Academy in Akita, and is a pop-type idol.

Yayoi has short, red chin-length hair with a few strands that stick up on end. She has straight cut bangs and two forelocks reaching her chin. She has noticeable slightly thick eyebrows and sharp blue eyes, along with a tiny fang at each corner of her mouth. She always wears a mask on her head.

Yayoi (やよい, Yayoi), when written in hiragana, has no true meaning. However, it can be written in kanji as "弥生" (meaning full of life), which is the traditional Japanese name for the month of March. 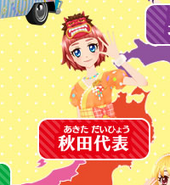 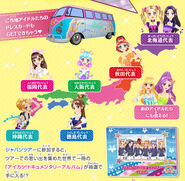 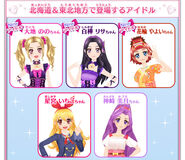 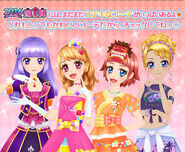 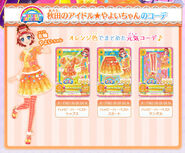 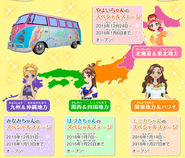 Aikatsu Kakugen art from "AIKATSU! TOP OF WORKS 2"
Add a photo to this gallery

Add a photo to this gallery
Retrieved from "https://aikatsu.fandom.com/wiki/Yayoi_Hanawa?oldid=222534"
Community content is available under CC-BY-SA unless otherwise noted.