Winter Sprite Coord (ウィンタースプライトコーデ, Winter Sprite Coord) is a normal story coord made by the LoLi GoThiC. It debuted in Part 3 of the Data Carddass Aikatsu! 2015 series and did not appear in the anime. It shares its design with the Winter Formula Coord.

A white elbow-length top with ruffled collar and sleeve cuffs to match the strips of ruffles on each shoulder and going down the chest. The bottom is trim with pointed, pearl blue fabric residing over a layer of indigo pleats. Sewn over this is a midnight blue bustier with a pattern of skinny indigo lines and white pointed lining. A milk blue ruffled strip goes down the middle with two gold diamonds sewn to it. On the lower left corner is a silver story emblem. Glittery, milk blue gradient straps around around each shoulder, shaped like a diamond on the bottom with a snowflake design on it. A dark blue bow-tie is included with a large, sapphire snowflake gem at the middle and a pair of silver tassels hang from it.

A midnight blue skirt with a skinny indigo line pattern. Inches from the bottom is a gold woven band, while the bottom is trim with indigo pleats. On the skirt spread between the glittering milk blue peplum sewn on top of it is are two gold diamonds above a gold snowflake, beneath a silver tassel hanging from chains. The peplum has similar shaping to the straps on the sleeves, each with a large, white ornate diamond instead. On the left corner is the story emblem.

Midnight blue shoes with an indigo sole gold detailing on the foot. The indigo cuff is lined in white, with the left's left side holding the story emblem. A milk blue ribbon is sewn to the tongue of the shoe, where a white snowflake ornament rests. Comes with alternate styled stockings, one being solid light indigo. The other is made from light indigo and milk blue diamonds. On some of the diamonds are white snowflakes.

A blue headband with a crystal diamond chain at the center, accent by four sapphire gem stars attached to electric pink bases. Attached to the side are three large diamonds on gold pearl bases, with a fleur-de-lis on each point. The middle is gem is blue with an etching in the center, while the two surrounding it are sky blue. Gold pearl chain earrings are included with a fleur-de-lis so far down. One earring connects to a diamond gem, the other has a chain of gold and blue pearls attached to a sapphire star. 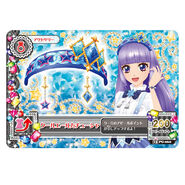 Add a photo to this gallery
Retrieved from "https://aikatsu.fandom.com/wiki/Winter_Sprite_Coord?oldid=230771"
Community content is available under CC-BY-SA unless otherwise noted.