White Santa Coord (ホワイトサンタコーデ, White Santa Coord) is a campaign rare boom and fever coord by the cute brand Dreamy Crown. It debuted in Part 2 of the Data Carddass Aikatsu! 2016 series and in Episode 165 of the anime.

A white elbow-length sweater with fluffy pink collar, sleeve cuff, and lining the bottom, covered in big pearl pink markings. Sewn to the chest in a triangular shape are three, red and pink diagonal striped ribbons lined in gold, along with four large gold buttons. On the left corner are two gold bells and holly berries with two leaf. White gloves are included with a brown bow on the wrist and ruffled trim.

A white skirt with ruffled trim covered in a pattern of red, gold, and pink diagonal stripes. A solid white semi-ruffled layer resides over this with fluffy pink lining. On each lower corner is the ribbon from the top, now as a bow, with a gold snowflake hanging from it adorned by a crystal gem. A brown belt with gold straps and buckle is included, with a gold pearl chain hanging around the left side of the waist. Covering it are leaf, large red, blue, and purple spheres, and gold bells.

Short brown boots with a white sole and darker brown around the upper portion, separated by a gold line. The ruffled white cuff is covered in red, gold, and pink diagonal stripes, and wrapped around it is the fluffy pink fabric. The red striped ribbon is sewn to the middle with a white pom-pom on it. Pearl stockings are included, covered in gold dots and snowflakes below the knee. Around the right thigh is a leafy garter with striped bow and a pom-pom sewn to the center. A gold snowflake hangs from it adorned by a gem. 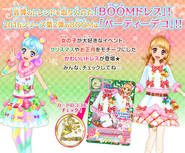 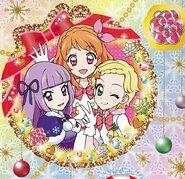 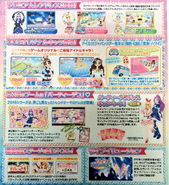 Add a photo to this gallery
Retrieved from "https://aikatsu.fandom.com/wiki/White_Santa_Coord?oldid=257402"
Community content is available under CC-BY-SA unless otherwise noted.