A denim tube top with rainbow stitching and three gold stars sewn to the center. On the left corner are colorful badges, a lip patch, and VK patches. The top has a ruffled goldenrod check border covered in lips, writing, and palm trees. Puffy denim sleeves with a thinner cuff are included with the same trim as the torso and covered in Vivid Kiss written in colorful letters, and badges. Also included is a gold chain necklace, a colorful bead bracelet, a red bracelet, and the orange check fabric knotted on the wrist.

A denim skirt with a semi-ruffled petticoat beneath it. A goldenrod sweater is wrapped beneath the woven belt, which has a gold oval buckle. Going down the center are gold stars, and drawn on the corner are designs similar to those on the top.

Brown cork sandals with rainbow stitching and denim toe straps and fabric covering the heel. On the strap is the goldenrod fabric tied into a bow, and multiple thin brown straps wrap around the foot held by three rectangular beads of light purple, green, and pink. Rainbow striped ankles lined in brown and adorned by a gold star on the side are included. 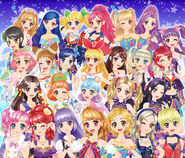 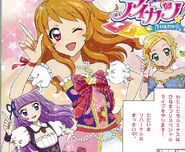 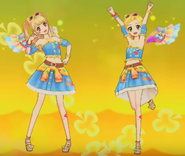