Tyrolean Aries Coord (チロリアンアリエスコーデ, Tyrolean Aries Coord) is a premium rare constellation coord made by the cute brand Aurora Fantasy. It debuted in Part 3 of the Data Carddass Aikatsu! 2014 series and in Episode 68 of the anime.

A white lace top with sleeves ending inches beneath the elbow in two scalloped layers beneath a red and beige four-petal bow. Beige fluff is sewn around the shoulder, and inches beneath it is a blue, red, and brown floral band. On top of the chest is gold stitching flowers of blue, pink, and orange, while beneath the chest is a dark blue corset lined in gold with a white strip on each side, stitched in red. The middle is light red with brown string over it, and the bottom is trim with white scallops that have gold stitched designs. A brown vest is included with gold lining and colorful flower pattern, adorned by a large crystal gem on an ornate gold base. A dark blue choker with frilly border is worn on the neck with a small red bow at the middle and a gold bell beneath it.

A red princess skirt with thick orange stripes lined by a fancy gold border. Going down the middle of each stripe is a beige butterfly pattern. On each side of the skirt are two, dark blue crossing straps with a red and gold flower and dot pattern. Sewn to the middle of each side is a small basket full of red, orange, blue, and pink flowers. The bottom of the skirt is lined in gold twisted material, trim with large, light beige scalloped lace. A white apron with pale beige lace lining hangs down the middle with a gold design surrounding a vine and flowers of gold, red, orange, purple, and sky blue. On each lower corner is a red and azure gem design.

Boots with the foot portion resembling a brown loafer with gold stitching on top and the flap, and a gold sole with chunk wedge heel. On the foot is a crystal gem with a single gold stud on each side, while the flap has a white and pink flower design. The leg fabric is red with leaf vines sewn to it, adorned with orange, pink, and blue flowers. The fluffy beige cuff has a blue, red, gold, and pink band around the middle, with a four-petal bow on the side.

A brown basket tiara with a single, large orange flower and smaller yellow, pink, and blue flowers, and four green leaf. The earrings are orange and blue flowers with a thin chain attached to a gold fringe with a thin red band around it. Fluffy beige fairy wings are included, covered in leaf and flowers of orange, pink, yellow, sky blue, blue, and purple. 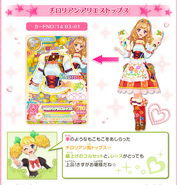 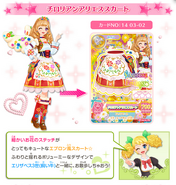 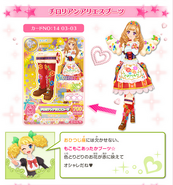 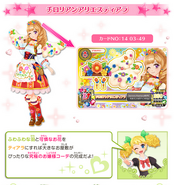 Retrieved from "https://aikatsu.fandom.com/wiki/Tyrolean_Aries_Coord?oldid=238986"
Community content is available under CC-BY-SA unless otherwise noted.