A dress composed of a dark blue corset that has thin magenta line print and a thicker magenta band with gold border going down the middle. Over this are three gold ornate straps, and the bottom is trim with purple ruffles. Black fabric lined by lace covers the chest, and magenta fabric covers the sides and shoulder. The collar is white with a topaz, sapphire, garnet, and gold piece at the center that has a garnet gem hanging from a chain. The red skirt is partially folded at the front to reveal dark blue inner-coloring, held by two gold straps with gold trim and buckle and a white stripe at the middle, one being cyan, the other yellow. Over the skirt is a ruffled split purple layer with faint white spheres, beneath a shorter split magenta layer lined by white ruffles. Black sleeves covering the lower arm are included with gold lining and three gems at the middle, coming in sapphire, topaz, and garnet. White ruffles cover the wrist. The user gains garnet, sapphire, and topaz facial markings beneath the left eye.

Black heels with a gold sole and pointed heel. Two stripes of magenta go across the foot with matching colored ankle straps. Black mesh stockings with a rose design are included, having a thick cuff and garter straps.

A hair ornament resembling the collar piece. This is paired with gold diamond earrings with a gold pearl chain connected to a topaz petal shape that has a garnet diamond at the center, followed by a single pearl and a sapphire diamond. 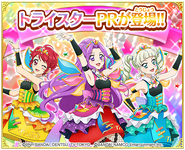 Add a photo to this gallery
Retrieved from "https://aikatsu.fandom.com/wiki/Tristar/Magenta_Trio_Coord?oldid=257171"
Community content is available under CC-BY-SA unless otherwise noted.