Tokui is a journalist who usually reports Aikatsu! events and has discovered many things about each idol, such as Ran's liking towards Ebi-Pon. He also has a morning talk show and often invites idols like Ichigo Hoshimiya onto his show or even top designers. In addition, he also reported about the Star Dream Festival & Carnival.

Tokui has fair skin and very bright brown eyes. His hair is a dark shade of gray and resembles that of a common male cut, slicked towards the side in a point; while on the right side of his head are two cowlicks.

Tokui is a passionate man who always displays an excited energy. 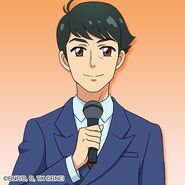