Taichi is an explorer who travels around the world to seek out foods the world has never seen before and bring happiness to those people. He is an honest person who keeps promises and never lies. Despit this fact, the stories he tells to Ichigo Hoshimiya and Raichi Hoshimiya about his travels tend to sound somewhat fishy, however the two never doubt that it's the truth. Like his wife, he seems to have a connection with the Starlight Academy headmistress, Orihime Mitsuishi, once stating that "Hime-chan is still the cool beauty she's always been". Because of that it's possible that Ringo may have met him before auditioning to become an idol and may be why she chose the stage name "Miya" when she was a member of Masquerade.

Taichi is a olive-skinned man with short dirty blond hair that has bangs swept to the left side and red eyes.

He is commonly seen wearing a chocolate-colored suit.

Taichi is a kind, honest and trustworthy man who appears to be rather energetic and determined. He is a very friendly individual and "quite the man", according to Johnny Bepp or Johnny Schwarz Jersey Coord.

Ringo is Taichi's wife whom he met while she was singing alone.

Ichigo is Taichi's daughter whose deep father-daughter relationship can be shown through Taichi rushing to come back after obtaining the stargrapes from the faraway village in order to watch Ichigo's special audition in Episode 25. 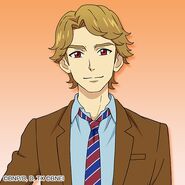 Taichi and children from the village that Stargrapes originated.