Sunny is the top designer of Dance Fusion and was the member of the dance unit Sunny & Johnny.

He has blonde hair, brownish eyes, and eyebrows which are slightly thicker than normal people. He also appeared to have cut his hair and gained weight compared to his youth.

He was a top-notch dancer and the former partner of Johnny Bepp, having acted together as the legendary duo dance unit Sunny & Johnny. Together, the two of them were known as the "Kings of the Dance World". Not long later, Sunny decided to become a designer and made a promise with Johnny; he would design outfits worthy of the students Johnny taught, and someday their paths would merge again.

They were once part of a duo dance unit. However, the group separated after deciding to go on different paths. The two do not hold grudges together and seem to get along well. 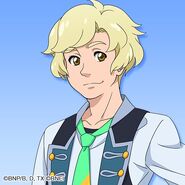 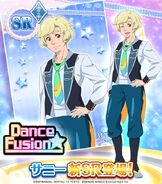 Add a photo to this gallery
Retrieved from "https://aikatsu.fandom.com/wiki/Sunny?oldid=259307"
Community content is available under CC-BY-SA unless otherwise noted.