A sleeveless dress with knee-length balloon skirt in a gradient of light pink to purple. A hot pink pattern covers the pink section, and coloring the middle is a thick magenta band. Around the top is gold lining to accent the design at the middle of the chest, which has small sapphire gems surrounding a large silver decorative crescent moon that has a large crystal on it. From the top of the chest to the neck is a gold choker adorned with a sapphire gem surrounded by crystal, turquoise, and emerald gems. Around the waist is purple bunched fabric held by a gold piece that has a light blue gem surrounded by diamonds of sapphire, amethyst, turquoise, and emerald. A gold strand lined with pearls hangs beneath this. Around the top of the skirt are several pearls in various sizes. Included are indigo opera gloves with a gold cuff that has a turquoise gem hanging from the middle and trim of light pink fabric. Around the right wrist is a gem bracelet, and on the left shoulder is a tattoo.

Gold sandals with a thin wedge heel and magenta flap on the top of the foot. Sewn to the center is a large light pink bow adorned by a gold crescent with a large crystal gem and three, tiny light blue gems. A flap of fabric covers the heel, and around each ankle are large, colorful gem anklets. Further up on the left leg is a gold ornate crescent tattoo with a ruby lips.

A gold ornate moon pin with ruby lips and small, white to pink molded feathers. On them is a sapphire gem with slightly smaller amethyst and light blue diamond gems. A gold earring with two pearl chains attached from the secondary sphere to a crescent is included. On the crescent is a large crystal diamond gem surrounded by four smaller silver diamonds.

Same as above, but with the addition of light pink feathery wings with a lilac gradient layer over them lined in white and adorned by scattered light blue, sapphire, and amethyst gems. A white ornate design is on top of the wings, and the base is covered in white fluff. 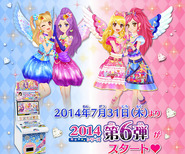 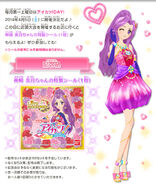 Retrieved from "https://aikatsu.fandom.com/wiki/Summer_Night_Moon_Coord?oldid=254785"
Community content is available under CC-BY-SA unless otherwise noted.