Stylish Thief☆Swallowtail is a popular movie about two thieves who take back stolen Aikatsu cards from the clutches of a mysterious organization. The director is Kurosaki who is Hime and Miya's close friend due to past work. It is because of this drama that Masquerade became popular nationwide. This movie is first mentioned in episode 21 of the anime.

A mysterious organization attempts to monopolize Aikatsu cards from all over the world. The mastermind claims that all of the world's fashion and Aikatsu cards belong only to her. The idols whose cards were stolen sink into despair as they think, "We won't be able to answer our fans' expectations like this…" That is until their saviors suddenly make their appearance. They are the Stylish Thieves☆Swallowtail.

Upon arriving at the audition, the girls are tasked with recovering a card that was stolen from a holographic Mizuki from a booby trap filled castle, where Ichigo and Otome's hasty movements cause trouble for Ran and Yurika. Although Yurika manages to help the gang get past a group of guards, her lack of training makes itself noticeable when she has to dodge security lasers. As the girls soon reach the escape phase of their audition, they end up having to fight their way past Aoi and Shion onto a hot air balloon. When the balloon suddenly starts to descend, Ichigo and Otome decide to get off to lighten the balloon, shortly joined by Ran and Yurika, who decide to join them. In the end, Otome and Ichigo did make it through and was picked as the winners of the audition.

When the movie is released, Ichigo and her friends go to watch it in the theaters. They were in disguise, however Raichi Hoshimiya is able to find them by their "scents". After saying that he could not pick up Ichigo's "idol scent", Ichigo tries to train herself to exude her aura at will. 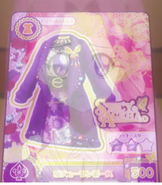 Add a photo to this gallery
Retrieved from "https://aikatsu.fandom.com/wiki/Stylish_Thief☆Swallowtail?oldid=256032"
Community content is available under CC-BY-SA unless otherwise noted.