Starlight School (スターライト学園, Starlight School) is an all-girls school dedicated to training idols. The current headmistress of the school is Orihime Mitsuishi. It is a prestigious school where girls train to become idols and take part in various auditions. To participate in these auditions, players use Aikatsu cards, special cards which contain digitalized dresses and accessories from various manufacturers that are used in their auditions. How well they succeed is often dependent on choosing the right combination of cards. It has grades from beginning of middle school to the end of high school as revealed in Episode 23.

The dance studio is a room inside the academy. The dance studio has two practice bars for stretching and warming up and there are two doors on either ends of the room. The walls are an extremely pale green and the floor is made of tiles with diagonal patterns running along them. The wall opposite the doors have windows that stretch across the entire wall. The ceiling is filled with lights so idols can use the room when it is dark.

The Cafeteria is where idols eat and take their breakfast, lunch, and dinner. They also take their snacks here. It's chef is a former idol, Shun Yotsuba. Besides that, they also have delicious star donuts made by Yotsuba Shun as stated in some episodes of Aikatsu! . It's tables are made of wood as well as it's chairs. It also has glass windows which shows a clear view of the outside making sunlight pass through.

The track is a large outdoors area consisting of running tracks and large patch of grass in the center. The track itself is red and in an oval shape. There are bleachers on three-sides of the track and one side is covered in trees. The bleachers have entrances for the students to enter the track.

As a Japanese educational school, all students wear a school uniform. There are two uniforms for the seasons. In autumn and winter, students wear a long sleeved coat with a white blouse underneath. Their skirts are white and pleated with a blue trim-line above the edge of the bottom. In spring and summer, students wear a white short sleeved shirt and a blue skirt with white trim-lines above the edge of the bottom. The overall outfit resembles a basic Japanese sailor school uniform outfit.

The track suits can be different colors depending on what type idol you are. Cute idols have pink, Sexy idols have Purple, Cool idols have blue, and Pop idols have orange.

They wear white and type colored sweatpants. On the back of the sweatpants, they have a shooting star that is their type color. The sweatpants cut off a little bit above the ankles.

Note: This section is based on the anime series. 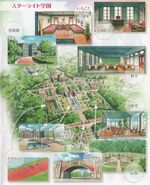 Add a photo to this gallery
Retrieved from "https://aikatsu.fandom.com/wiki/Starlight_School?oldid=240619"
Community content is available under CC-BY-SA unless otherwise noted.