A pale blue gradient top with baby blue lining the bottom, trim with white ruffles to accent the top, which is lined by gold beads, and a strip of fabric sewn diagonal to the torso with a gem chain. Ruffled gold and peach pieces of fabric are sewn diagonal on the chest with a large, rainbow gem star and pieces of ribbon hanging from it. Gems and stars are sewn along this fabric, along with the bottom left corner. Beneath the shoulder are layered, pale blue feathers attached to a decorative gold band. The user also gains a gold ornate choker with stars of gold and silver, and decorative matching bracelets adorned by tiny diamonds and shards of indigo and amethyst gems.

A pale blue skirt with slightly darker waistband and a feathery lining. Sewn over this is gold lace fabric accent by strips of peach fabric, pale blue ruffles, and several ornamental stars and various shaped gems. Sewn to the right corner of the front, and left corner on the back is a colorful gem star with angel wings and indigo and amethyst gems hanging from it. Also hanging from these are strips of ribbon with gold ornate designs.

Gold sandals with tiny gem studs, including a single strap made from them. At the middle of the foot is an amethyst gem. Silver anklets with crystal gems are included with a bead chain lining the back of the leg. Ribbon straps of fuchsia, indigo, lime, and sky blue fabric wrap around the leg with a gold star in the center, accent by indigo and amethyst gems. A gold cuff hands around the top with a cuff made from folded, pale blue wings.

Feathery blue to white angel wings with a layer of pink feathers. Gems and gold ornate detail cover the top of the wings. A silver tiara is included with four sapphires surrounding a single ruby. A rainbow gem star resides at the middle, with a smaller gem star on each corner and sapphires lining the band. Gold dangles are also included, with a star, white and blue ornament, and a ruby gem hanging from it.

Feathery pale pink, lavender, and blue gradient wings with gems and silver ornate detail. A silver tiara is included with four sapphires surrounding a single pale pink gem. A berry thematic rainbow gem star resides at the middle with a smaller gold star on either end of the tiara, lined with sapphires. Gold earrings are included with a chain hanging from the studs, adorned by a star and droplet gems. 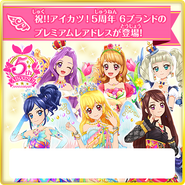 Add a photo to this gallery
Retrieved from "https://aikatsu.fandom.com/wiki/Star_Festival_Coord?oldid=259116"
Community content is available under CC-BY-SA unless otherwise noted.