SpLasH! is a duo unit of Michelle Tachibana and Asami Himuro. Though not much is known about this group, they participated in the Special Audition in Episode 9 and appeared in several other episodes. They were given a bigger introduction during the Tristar Audition in Episode 33.

Currently, SpLasH! does not appear to have any unit coords.

SpLasH! has yet to be seen performing. 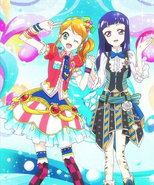 Add a photo to this gallery
Retrieved from "https://aikatsu.fandom.com/wiki/SpLasH!?oldid=133756"
Community content is available under CC-BY-SA unless otherwise noted.