Snowflake Coord (スノーフレークコーデ, Snowflake Coord) is a rare constellation coord made by the cool brand Futuring Girl. It debuted in Part 3 of the Data Carddass Aikatsu! 2014 series and made a cameo appearance in Episode 90 of the anime.

An orange, gold, green, turquoise, and emerald gradient top covered in faded snowflakes, dots, and sparkle marks. Aquarius is written in pink on the bottom left corner, while sewn around the top of the chest is a trim of white ruffles. At the middle is a gem snowflake. Beneath the chest is a green and blue gradient band with a pattern of snowflakes and a border of tiny ruffles. White straps reside on the shoulder, and covering the collarbone is white lace fabric attached to a ruffled choker. The user gains a blue spherical necklace with a large blue sphere in the middle surrounded by a single yellow sphere on either side. Opera gloves trim with ruffles are included, having the same pattern as the top and a dark blue bracelet on each wrist. The left glove is a gradient of blue and green, while the right is pink, orange, and gold.

An orange, gold, green, and emerald gradient skirt covered in faded dots, sparkle marks, and snowflakes in various sizes and styles. On the bottom left corner is Aquarius, written in pink. Sewn over this is an orange peplum with a pink gradient around the bottom and a light white and pale blue snowflake pattern made in a variety of styles.

White shoes with a gold sole and ruffled light blue fabric sewn around the top. At the middle of the fabric rests a colorful snowflake gem. These are worn with gradient pink, orange, and gold tights that have sheer fabric on top of the leg. Aquarius is written in pink on the left thigh. 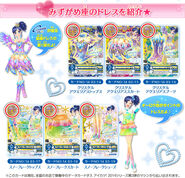