Snow Princess Coord (スノープリンセスコーデ, Snow Princess Coord) is a premium rare romance story coord made by the cool brand LoLi GoThiC. It debuted in Part 1 of the Data Carddass Aikatsu! 2015 series and in Episode 108 of the anime.

A red top with gold ornate leaf and vine designs and border. The bottom is lined by lace, and at the middle of the torso is a band of black with gold detail. Surrounding this is a slightly darker red strip that is bound by black ribbon. A dark red strap resides on top of the chest with a gem apple design surrounded by gold leaf and vines, accent by a single sapphire gem on each side. This section is lined in gold and a trim of ruffles, accenting those on each shoulder. From the top of the chest is black silk ribbon that wraps beneath the neck with a ribbon on the front. Beneath the chest are two gold bead and pearl chains with a gold cross hanging from the lower chain, adorned by a sapphire gem. The sleeves are white and black striped, with gold lining, studs, and cross ornaments and trim of ruffles. On each wrist is a black cuff bound by red string and trim by ruffles.

A white and black striped skirt with gold ornate lining and designs between each stripe. On the white stripe is a crowned apple with black diamond and fleur-de-lis design, while on each black stripe is a gold cross with dots above and below it and adorned by a blue gem in the middle. Over this is a red, peplum layer split into four sections, each featuring a gold lead and vine design surrounding a cross with a single sapphire diamond gem surrounded by tiny emerald gems. Gold lines the peplum while a fringe lines the bottom. At each corner is a plain section held by black ribbon with gold tassels hanging from the tails. On each hip are two pearl and gold bead chains attached to a gold ornament at the middle.

Red boots with a black sole and chunk wedge heel. The sides are slightly darker with a small gold leaf and vine design on each side. The tongue is a similar color with black string lacing it and a tiny tassel hanging from each tail. The white cuff has a gold border and a black design surrounding the black flap hanging from the middle. On it are gold designs surrounding a gem apple. A gold fringe lines the flap, and lining the cuff is a piece of scalloped lace.

A large, juicy red apple on top of a small gold crown with a pattern of tiny gold diamonds alternating with bigger, emerald gem diamonds. Beneath the smaller gold diamonds rests a stud. At the middle of an apple is a gold embedded diamond on a tiny base. Gold bead dangles are included wih a red velvet ribbon hanging above a diamond. 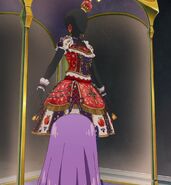 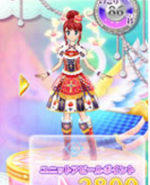 Retrieved from "https://aikatsu.fandom.com/wiki/Snow_Princess_Coord?oldid=260265"
Community content is available under CC-BY-SA unless otherwise noted.