Sky Pony Land Coord (スカイポニーランドコーデ, Sky Pony Land Coord) is a normal coord made by the brand Magical Toy. It debuted in the promotional collection of the Data Carddass Aikatsu! series and made a cameo appearance in Episode 55 of the anime. It shares its design with the Pony Land Coord.

A light blue blouse with a gold curvy line so far down, revealing white fabric lined in navy that connects to the buttoned strip going up the middle, adorned by a row of gold buttons and trim with ruffles. The collar is baby blue with gold lining and ruffled trim, while each sleeve cuff is white with gold border and magenta studs around the middle, trim with ruffles. On the right of the chest is a dark blue with baby blue dots and a white flap held by a gold button. On the opposite side is a green striped pin lined in gold, and a purple badge that has gold lining, white dots, and yellow ribbon tails. A red and gold tie is included with a horse drawn at the bottom, along with four bracelets coming in orange, lime, purple, and yellow, and a pair of wristbands. One is light blue with a white ring around the middle, the other is yellow with a light blue ring.

A thickly striped white and baby blue scalloped skirt with gold lining. Beneath each baby blue stripe is a gold diamond, and sticking out of the bottom is a pearl pink pleat covered in large white dots. On top of the skirt is a cherry curvy section with thick gold border lined with studs to give it a resemblance to a gold structure. On every fold is a large blue gem with a gold border and a black horse drawn on it. Each gem is connected by yellow bunched fabric. Gold lines the top of the waistband.

Cherry slip-ons with a pink dot pattern and a white and blue striped platform sole. White lines the insert, and on the foot is a pink ribbon adorned by a sapphire gem. Included are black and baby blue checkered stockings with a magenta cuff lined by gold and trim with white frills. Gold studs circle the top of the cuff.

A pink striped headband with four balloons on the corner, two of which being yellow and fuchsia to form leaf, surrounding two flowers, one orange, the other made from orange, navy, and light blue balloons. Gold pearl dangles are included with a carousel horse at the bottom, one is blue, the other pink. 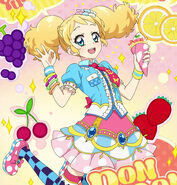 Add a photo to this gallery
Retrieved from "https://aikatsu.fandom.com/wiki/Sky_Pony_Land_Coord?oldid=241043"
Community content is available under CC-BY-SA unless otherwise noted.