Dream Sky Coord (ドリームスカイコーデ, Dream Sky Coord) is a normal unit coord by the cute brand Dreamy Crown. It debuted in Part 5 of the Data Carddass Aikatsu! 2015 series and in Episode 134 of the anime. Its matching unit coord is the Sweet Sky Coord.

A short pink dress with two gold buttons at the middle of the chest and bunched magenta fabric wrapped around the top with a indigo and purple striped ribbon lined in white at the middle. The same band lines the bottom with gold lining to match the cuffs beneath the shoulder, which is adorned by a light pink bow and trim of ruffles. Around the waist is a loose pearl chain with a few alternating gold pearls and a baby blue ribbon on the corner, adorned by a pom-pom and a gold star with a pink gem. Sticking out of the skirt is a longer, soft pink gradient layer lined by frills and covered in clouds, sparkles, dots, and pink and purple hearts in various sizes. Included is a scalloped collar with a chain necklace with the star gem ornament hanging from it.

Pale brown boots with a gold platform sole and wedge heel. The toe is white with a striped band above it line by white frills. The tongue is pink to yellow gradient with gold string, two pom-pom, and a magenta bow sewn over them, adorned by a gold four-point star with a pink gem at the middle. The boot is lined in white and around the top are frills.

A purple and indigo striped mini hat with white lining and fluffy pink tinted rim. At the middle is a red bow lined in gold and adorned by a rainbow striped heart. Gold pearl dangles are included, one with a pom-pom hanging from it, the other has a magenta bow and a gold four-point star with a pink gem at the middle. 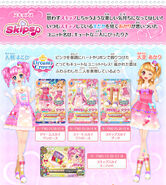 Retrieved from "https://aikatsu.fandom.com/wiki/Skips%E2%99%AA/Dream_Sky_Coord?oldid=258009"
Community content is available under CC-BY-SA unless otherwise noted.