Shine Witch Coord (シャインウィッチコーデ, Shine Witch Coord) is a premium rare story coord by the sexy brand Love Moonrise, which follows the story Sleeping Beauty. It debuted in Part 2 of the Data Carddass Aikatsu! 2015 series and in Aikatsu! The Movie.

An indigo tank-top with gold lining and designs at the center of the torso, shaped like a heart with glittering blue coloring to match the collar. Beneath the heart is a small amethyst, while on top of it is a large crystal gem. Comes with a golden ornate necklace with two ruby gems and a single amethyst, a matching arm accessory with a story emblem hanging beneath it, and long indigo gloves with gold lining, vine designs, and a gold bracelet with a blue stone.

A two-piece skirt with the outer piece being cut into a large slit on the left of the hip to reveal the second skirt. The top is indigo with curling thorn vines, pearls, gold lining, and gems. On the waist is a design surrounding a single crystal gem, while on the slit of the skirt is a large gold ornament with a large gem in the center. Hanging from it is a gold and indigo story emblem. The second skirt is blue with white, green, and pale pink glitter coating.

Glittering blue shoes lined in gold with a gold heel and an indigo toe. At the center of each foot is a blue stone, and on the side of the left heel is a Story emblem. Included are a pair of indigo stockings with thorn vine designs, tiny pearls, and gold designs on top of the knee and a large blue gem.

An amethyst ornament lined in gold with curled, spiked designs surrounding the top of it, including a large crystal gem with a diamond on top of it. Includes are silver star-shaped studs attached to a gold circle with a large crystal stone. 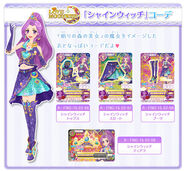 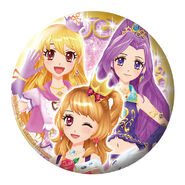 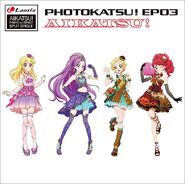 Add a photo to this gallery
Retrieved from "https://aikatsu.fandom.com/wiki/Shine_Witch_Coord?oldid=255784"
Community content is available under CC-BY-SA unless otherwise noted.