A white blouse with midnight blue sleeve cuff that has a ring of gold around the bottom and a pattern of diamond studs. Sewn to the left sleeve is the gold story emblem. The collar has the same gold detail. Over this is a glittering sapphire vest with a baby blue metallic border with gold bordering and designs. From the right shoulder to the lower left of the chest is blue fabric with a sky blue and dark blue swirl pattern, the lower portion is knotted with loose fabric hanging from it. Between the two sides of the chest are two silver chains, the lower of which has a pattern of sky blue and amethyst diamond gems. On the side of the chest is a large sapphire with gold base that has a silver cross hanging from it and four azure gradient feathers. Around the navel is a silver belt with an ornate buckle adorned by a single, small sapphire gem. Surrounding the belt are large alternating gems of amethyst and sky blue. Included are midnight blue wrist guards with silver lining on the hand and a large cross design adorned by a sapphire gem and four gold studs. Around the top are white ruffled layers, the bottom of which has sky blue ombre.

A pale blue to white gradient semi-ruffle with multiple glittering sapphire flaps attached to the waistband, each with a metallic baby blue border with gold designs and border. On each flap is a silver sword design with a square-shaped sapphire gem on a gold base that has a smaller gold pearl above it. Beneath the waistband is the blue patterned fabric that wraps around and is held by a large sapphire gem on a gold base with two ruffled layers hanging beneath it. On the left corner is a story emblem charm.

Sapphire glittering boots with a dark blue heel and pointed toe with a silver crown design. Around the ankle are four, dark blue enamel straps with two silver studs on each strap and a cross in the center. A silver chain hangs between the bottom straps with a sapphire gem on a gold base, and two diamond gems of sky blue and light gold. Gold lines the top with azure feathers sticking out of it. On the side of the left leg is a story emblem tattoo and a midnight blue and indigo sword tattoo. 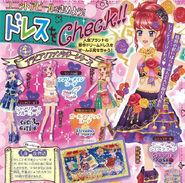 Add a photo to this gallery
Retrieved from "https://aikatsu.fandom.com/wiki/Shahriyar_Blue_Coord?oldid=234673"
Community content is available under CC-BY-SA unless otherwise noted.