Start a Wiki
Sakon Kitaoji is the older twin brother of Sakura. He's a kabuki actor along with his father and grandfather and, like the other members of his family, he has the genetic habit of breaking into theatrical performance when experiencing strong emotions known as the "Kitaōji Theater".

Sakon is shown to be a protective older brother who cares for his sister's well-being. At first, he objected to Sakura attending Starlight Academy due to his worry of her unable to support herself, but after seeing how dedicated Sakura was to attaining her dream, he decided to support her.

Like Sakura, Sakon has similar peridot-green eyes, although slightly lighter. He has soft-orange hair, and is usually depicted in a male school uniform. 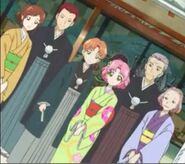 Add a photo to this gallery
Retrieved from "https://aikatsu.fandom.com/wiki/Sakon_Kitaoji?oldid=258066"
Community content is available under CC-BY-SA unless otherwise noted.