Romantic Fur Coord (ロマンティックファーコーデ, Romantic Fur Coord) is a rare coord made by the sexy brand Spicy Ageha. It debuted in Part 4 of the Data Carddass Aikatsu! series and made a cameo appearance in Episode 33. It shares its design with the Romantic Purple Coord.

A glittering, gradient top of fuchsia and violet. The bottom and top have a trim of light grey fluffy fabric, with the top knotted and held by a large gem on a gold base. Gems of garnet and ruby adorn the fur, alternating in color and size. The user gains an ornate gold choker with the same gems hanging from it, and a pair of black elbow-length gloves that have a furry cuff.

A glittering, gradient loose pencil skirt trim with fluffy grey fabric. A black belt adorned by colorful gems alternating with tiny beads is included, along with a belt beneath it covered in gold studs. A gold chain hangs beneath the buckle and connects to the corner.

Black thigh length boots with small gems covering them. The sole is crimson with a pointed heel, lined by tiny studs. The fluffy grey cuff has a large garnet surrounded by a small sapphire gem on each side, and hanging from the back corner is a piece of furry fabric that diagonally wraps around the leg with a ruby gem on the bottom. A ribbon and ornament is sewn to the back.

A garnet gem sewn to a gold base on a fluffy black piece of material. Three black feathers tipped in purple and covered in tiny gem studs resides on the corner. Gem dangles are included, made of three pieces attached to three small circular pieces and a ruby droplet. 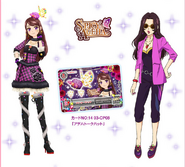 Only the boots are featured here 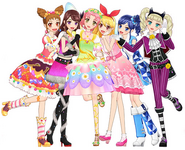 Add a photo to this gallery
Retrieved from "https://aikatsu.fandom.com/wiki/Romantic_Fur_Coord?oldid=228231"
Community content is available under CC-BY-SA unless otherwise noted.