A lavender off-shoulder knit with sleeves cut inches above the wrist and a lining of dark purple tulle around the sleeve, bottom of the torso, and around the bottom of the fabric around the top. At the center of the chest are ten buttons surrounding four bows, three of which are dark plum and one white with violet dots. On each arm Dolly Devil is written in raspberry with black accents, and on the fabric wrapped around the top are various pearls and gems of indigo, violet, and garnet. A large garnet on a gold base is sewn to the center. Included is a gold necklace with one indigo gem and two garnets.

A black denim skirt with a set of gold diamond buttons at the middle, one attached to a big lavender ribbon that has a purple floral print and a garnet gem at the center that connects to the button. Beneath the ribbon is a gold chain wrapped around the skirt, and on the lower corner is Dolly Devil written in gold with an indigo and raspberry design. The bottom is slightly scalloped with a pearl pink ruffled trim in two layers, covered in raspberry and purple designs.

Black denim shorts with the leg lined by lilac tulle and three pieces of ruffled fabric, two shimmering indigo, and one pearl pink with raspberry and purple designs. The Dolly Devil logo is designed on the left leg. The pockets are dark indigo and lined by topaz, garnet, and sapphire square-shaped gems. A dull purple belt with a violet button and pale lilac straps is included.

Black pumps with a piece of pearl pink fabric and a garnet gem sewn to the middle on the foot. Lavender knit knee-socks are included with a dull purple cuff lined by tulle.

Lavender pumps with gold lining the insert with a small indigo gem at the middle. Black stockings are included, with gold anklets adorned by a pearl pink bow on the side and two sets on the thigh decorated with garnet and indigo gems. 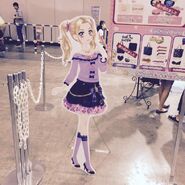 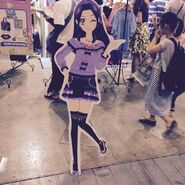 Add a photo to this gallery
Retrieved from "https://aikatsu.fandom.com/wiki/Romantic_Bijoux_Coord?oldid=257044"
Community content is available under CC-BY-SA unless otherwise noted.