Ringo runs a Bento shop called Nandemo Bento and she is one of Ichigo's main supporters as she travels down the path of an idol. She used to be worried that her own dream was influenced onto her daughter and wanted her to do what she wanted to. When Raichi told her that Ichigo wanted to be an idol, Ringo knew that she was in the way of her dream and told Ichigo to do what she truly desires.

It was hinted in several times in the series that Ringo may have been "Miya", the mysterious other half of the legendary idol unit, Masquerade. However, this assumption was never confirmed until Episode 47, when she removed her mask in front of Ichigo.

Ringo has wavy/curly red-brown hair that is usually kept in a low ponytail slung over her right shoulder and amber eyes. When she reunites with Orihime Mitsuishi as Miya, her hair is styled in a high ponytail.

Ringo is a very kind, caring and easygoing woman towards her family. She is also described by Seira Otoshiro as having a "la la la" vibe about her.

Ringo as a child.

A poster of Miya and Hime. 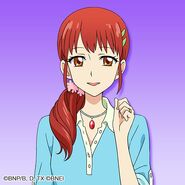 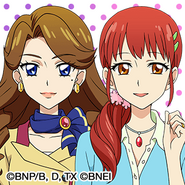 Add a photo to this gallery
Retrieved from "https://aikatsu.fandom.com/wiki/Ringo_Hoshimiya?oldid=254954"
Community content is available under CC-BY-SA unless otherwise noted.