A white ruffled low-cut top exposing part of the collarbone and trim with ruffles sewn to a gold strand. The sleeves are puckered with a ruffled trim. Over this is a red auburn mini-dress with ruffled skirt covered in large midnight blue numbers and a pattern of playing cards around the middle. The chest is low-cut with a yellow rose sewn to the left side, along with a few leaf and two small playing cards. Around the middle is a midnight blue bodice adorned by four card symbol-shaped gems, each the color of pink, orange, blue, or purple. The top is lined with tiny ruffles, while the bottom has ruffled fabric sticking out on each hip. Pink, purple, orange, and blue striped fabric sticks out from the bottom of the skirt. Included are midnight blue gloves with a trim of ruffles and an orange gem club sewn to the wrist. A midnight blue mini-tie hangs from the white folded collar, with the same gem attached to the bottom.

From the Fireworks Coord. Hot pink sandals with a red and gold striped strap covering the middle of the foot. Sewn to the top is a red ribbon that loops around the ankle. 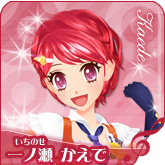 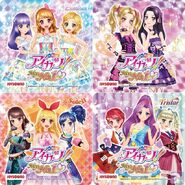 Add a photo to this gallery
Retrieved from "https://aikatsu.fandom.com/wiki/Playing_Trump_Coord?oldid=241084"
Community content is available under CC-BY-SA unless otherwise noted.