Pinkish Union Coord (ピンキッシュユニオンコーデ, Pinkish Union Coord) is a rare constellation coord made by the cool brand Swing Rock. It debuted in Part 2 of the Data Carddass Aikatsu! in 2014 series and made a cameo appearance in Episode 66 of the anime. It shares its design with the Thunder Union Coord and Freeze Union Coord.

A raspberry T-shirt with a zipper pulled up on each side to reveal indigo and black check fabric. Over this is a black enamel tank-top with silver buckled straps and rainbow colored dots lining both the top, bottom, and shoulders. A zipper pull is sewn to the middle, and on the lower left corner is the Scorpio logo. Raspberry sleeves are included with a buckled strap going down the arm and wrapping around them. The bottom is trim with purple ruffles. Included is a colorful bead necklace with a purple and white cat head charm.

A raspberry and black semi-pleat checkered skirt with a yellow petticoat. On top is an uneven cut layer with a Union Jack design covered in speckles. On the left front corner is the black and white Scorpio logo. Both the top and second skirt layers have gold lining. The black waistband has lime string laced between four colorful studs. A silver chain hangs around the left hip.

Indigo pumps with a blue and silver toe and an azure sole that has a thin wedge heel. Around the ankle are two straps of purple and lime, each with a blue or red cat head on the side. Sheer glittery tights are included, with a Scorpio tattoo on the left thigh.

Orange cat ear headband with black inner-ear. One ear has two black loop earrings, the other has red, blue, and yellow studs. Black pearl dangles with a gold lightning bolt charm are included.

A blue headband with a large Union Jack bow on the corner. On the right side are three small gems of yellow, green, and azure. Azure, yellow, and purple bead dangles are included, with an alternate order for each ear. At the bottom is a stylized azure Treble for one ear, and a lime quarter note for the other.

A blue check miniature hat with a black raised rim lined by azure spiked studs. Lime and pink paint drip down from the top, and circling the front is a silver chain held by diamond shapes. Black chain earrings are included, each with a star and charm dripping in paint. One has a small gold star with purple bolt and raspberry paint, the other has a larger black star and a pink note with lime paint. 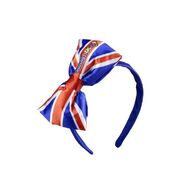 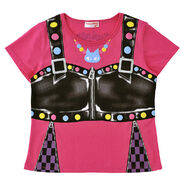 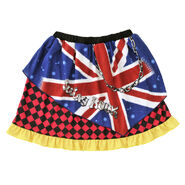 Add a photo to this gallery
Retrieved from "https://aikatsu.fandom.com/wiki/Pinkish_Union_Coord?oldid=243180"
Community content is available under CC-BY-SA unless otherwise noted.