A sparkling light blue gradient jacket with white fabric on the torso lined in black and adorned by eight buttons. The collar is white with black line detail and a light blue gem on each side, accenting the shoulder straps. Beneath the left shoulder is a silver strap lined in black. The white sleeve cuffs have black detail, and covering most of the neck is black fabric. The user gains white gloves.

A sparkling gradient miniskirt with black detail on the thick white border. On the corner are two silver buttoned straps lined in black to match the included belt. At the middle is a silver and pale blue ornament, while two chains hang on the right hip, attached by diamond studs.

Black boots with a silver sole and two buttoned straps on the foot. The white flap cuff has thin black lining and a light blue gem on each side. Beneath the cuff are two, silver diamond-style link chains.

A silver and pale blue diamond surrounded by four triangle shards. On the side are three larger shards resembling wings. The user gains a face design beneath their left eye.

A metallic blue headband with a gold, silver, white, and blue gem ear piece with a tiny white and pale blue microphone beneath it. An antennae sticks up from the piece with a spark of light on top. On the corner of the band is a golden tiara with a large crystal gem. The user gains a single sapphire gem and gold earring. 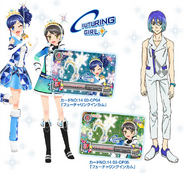 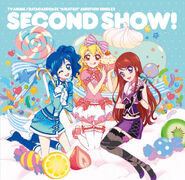 Add a photo to this gallery
Retrieved from "https://aikatsu.fandom.com/wiki/Pilot_Girl_Coord?oldid=254867"
Community content is available under CC-BY-SA unless otherwise noted.