Pearl Shell Coord (パールシェルコーデ, Pearl Shell Coord) is a rare constellation coord made by the cute brand Angely Sugar. It debuted in Part 5 of the Data Carddass Aikatsu! 2014 series and made a cameo appearance in Episode 98 of the anime.

A pale yellow top trim with frills with a blue gradient layer sewn over it, bound by sky blue ribbon. At the top of this ribbon is a rainbow clam shell and a ruby star. The blue fabric has dark blue lining and a trim of pale yellow frills around the top. At the middle are similar frills, along with a gradient green, and blue fabric covered in speckles, bubbles, and pearls. Sky blue frill lined straps reside on each shoulder, while hanging beneath them is a puffed, pale yellow sleeve with a sky blue ribbon that has an ornament on the side and trim of frills. A dark blue necklace is included with a gold piece in the center that has an amethyst hanging from it. A gold Pisces tattoo resides on the left shoulder.

A blue gradient skirt with semi-pleating at the corners and a speckled design of white, gold, turquoise, and green. The bottom is trim in blue, lined by yellow lace to accent the ruffled, layered yellow fabric sewn on the left of the skirt with Pisces written along the bottom. This section is adorned by a ruffled, sky blue ribbon that has a colorful clam shell and ruby star on it. Gold dangles hang from the right of the waist, each with a tiny orange gem on it, and an amethyst gem hanging from the bottom, along with sky blue bunched fabric.

Blue gradient boots with a dark blue sole and wedge heel to match the detail on the boot. A clam shell and gem star are sewn to the top of the foot. The middle is laced with sky blue ribbon and held by a gold hanging ornament in the middle. Pisces is written in gold on the side of the left boot, while chiffon ruffles are sewn around the top.

A pale pink headband lined with pearls, adorned by a colorful shell on the corner and two, small ruby gem stars. Pearl dangles on gold string are included, with a loop on the bottom, holding a tiny amethyst in the center. 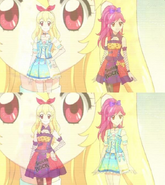 Add a photo to this gallery
Retrieved from "https://aikatsu.fandom.com/wiki/Pearl_Shell_Coord?oldid=230708"
Community content is available under CC-BY-SA unless otherwise noted.