A light blue gradient tube-top with strands of the fabric looped through a brown circular piece that goes behind the back. Beneath the loop is a gold design and an amethyst gem in the center and three dangles hanging from it, two large green and pink gems, one gold. Around the bottom is a brown strap with gold designs, colored stitching, and a garnet gem at the center. Gold circular dangles hang around the bottom. On each shoulder is a chain made from tiny ruby, garnet, and sapphire gems. Included is a gold, purple, and pink striped choker, a colorful bracelet, a colorful hand piece with a ring connecting it to the middle finger and a gold bangle adorned by a garnet gem, and multiple gold bracelets. Beneath the shoulder is a gold bangle with beige fabric and a gem on the side, with two pleat layers of light blue fabric beneath it, one covered in flowers.

A light blue gradient semi-ruffle covered in large leaf and colorful flowers. Knotted pieces of fabric hang on each hip, attached to a gold ornament. The waistband is light brown with a gold ring around the top and colorful design. On the front hangs two gold bead chains, followed by a strand with dangles hanging from it, and on the corner is a pink and white ornament with a gold diamond and dangles beneath it.

Brown platform sandals with a solid sole covered in stripes of gold, dark blue, red, and light purple. Straps of light brown are on the toe and foot, with a pale pink flower at the middle adorned by a large gold sphere, and a gold sphere on each side beneath the ankle. Gold dangles hang from the ankle, and sewn to the top are orange and red ribbon strips connecting to a brown band held by a single gold button on the side. Further up on the leg is a matching brown piece with pleat rainbow fabric beneath it. On the lower bottom is a single turquoise bead with a white to gold feather hanging from it.

A purple, gold, orange, and pink striped forehead piece with gold border and diagonal stripes of dark blue between them. On the side is a pom-pom that has an orange string ribbon tied on it. Hanging from the tails are beads of turquoise and purple, with a beige feather hanging from the bottom. Gold pearl dangles are included with a peacock-like feather hanging from the bottom. Gold curving wings are included, adorned by large diamond gems of sapphire, garnet, light pink, orange, and ruby. Attached are five droplet-shaped pieces in gold with a gem of turquoise, light blue, green, sapphire, and amethyst on them. 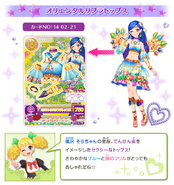 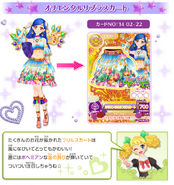 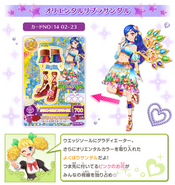 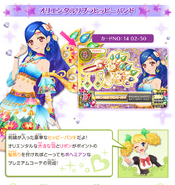 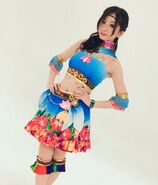 Add a photo to this gallery
Retrieved from "https://aikatsu.fandom.com/wiki/Oriental_Libra_Coord?oldid=244128"
Community content is available under CC-BY-SA unless otherwise noted.