A glittery blue sleeveless top with the bottom trim by dark indigo ruffled material that has a gem pattern above a gold band. Covering the chest is white fabric, and between the chest and bottom of the top is gold detail and string. Gold clips are attached to the top with strips of midnight blue ribbon that wrap around the back and shoulders, connected to a gold accessory resting at the middle of the chest.  On it are light blue gems, and beneath it are four silver shards. This piece connects to the gold leafy choker by chain strands, and at the center is a sapphire gem. Beneath the shoulder is a white spherical sleeve with a gold band on top adorned by a ruby, followed by silver detail and a strip of gold and silver striped fabric, and ruffled glittery blue fabric lined in gold. On each hand is a gold bracelet with a chain connected to the middle finger.

A dark indigo semi-pleat skirt with a large, gold sun at the front corner and a pattern of sparkles, large gems, and gold crescents around the bottom. Over this is a ruffled glittery blue peplum lined in gold, partially hiked up at the front corner. The gold ornate waistband has a clasp attached to a gold ornament that has two sapphire surrounding one purple gem, and silver shards hang beneath it. Attached to the ornament is milk blue fabric that is loosely tied to the back with one tail hanging from the front and the other back.

Gold gradient boots with a silver ornate pointed toe and sole. Around the ankle is a gold leafy ornate design with a sapphire gem in the enter, and around the middle of the leg is a gold crescent moon and diamond pattern. Each crescent is adorned by a single large purple gem and two smaller sapphires. The cuff is made from glittery blue fabric and has gold pointed lining around the top and a leafy ornament at the center, adorned by a large amethyst gem. Beneath it is gold bunched fabric connected to ruby diamonds on either side, and beneath each ornament is a silver diamond dangle.

A silver headband with gold ornate design surrounding a crescent with four, tiny alternate colored gems and a blue diamond gem hanging from the top. Around the forehead is a gold chain made from beads and loops surrounding a ruby diamond with a droplet hanging from it. The earrings are composed of gold studs with a silver chain adorned by a turquoise gem, silver wings, and a small ruby diamond. From the users back are wings formed from beams of light coming in a gradient of light blue, white, and gold, adorned by sapphire, emerald, and ruby gems alternating with small violet gems. Beneath them are smaller gold diamonds and the gems from the crescent. 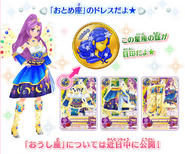 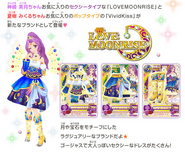 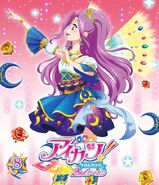 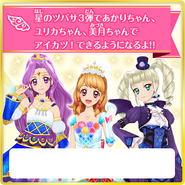 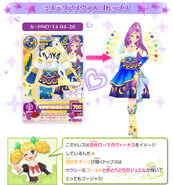 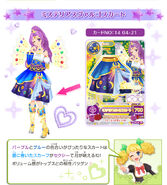 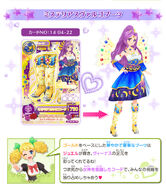 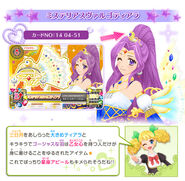 Add a photo to this gallery
Retrieved from "https://aikatsu.fandom.com/wiki/Mysterious_Virgo_Coord?oldid=254772"
Community content is available under CC-BY-SA unless otherwise noted.