– Aoi, giving an explanation of Mr. S in Episode 56

Mister S is a reporter who wants to know all the secrets of every idol. It is known that the moment he hears any news about a possible scandal breaking out (primarily love affairs), he sets out to get the details in relation to it.

He first appeared in Episode 56 - Top Secret of Love where he was in a studio. Later Kī Saegusa saw him riding around Dream Academy in a boat. It was revealed over time that he was determined to find the secrets behind Dream Academy's sudden success.

He appeared again in Episode 63 - Koh-haku Aikatsu Gassen! where the Red and White Aikatsu Battle was being held, hoping to find the person responsible for Dream Academy's rise to fame somewhere among them. Having overheard Aoi, Ran and Ichigo's conversation with Mizuki, Mister S prepares to write a big scandal on Mizuki's 'defection', but is stopped by Sabuko Nishijima, who uses her influence to keep him quiet.

Mr. S wears a black suit and is always seen with his camera. He also wears a pair of brown sunglasses which gives him a "criminal" flare. He has hazel colored hair. 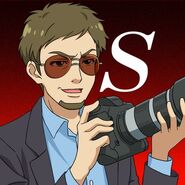 Add a photo to this gallery
Retrieved from "https://aikatsu.fandom.com/wiki/Mister_S?oldid=259217"
Community content is available under CC-BY-SA unless otherwise noted.