Michelle has fair skin and slightly slanted, turqoise eyes. Her vibrant orange hair is long and worn in a thick side-tail with a wing hair clip and a braid folded over her head like a headband. She has tuft forelocks that nearly reach her chest, while her bangs form around her forehead with a small split on the corner.

Michelle is the energy and outgoing one of the duo. She adores her friend Asami and is loyal to her and their unit, with her decisions usually based off of their friendship.

Thanks to Michelle's map, Ichigo can reach the Angely Sugar's headquarter as the digital map by her Aikatsu Phone was off along with the low battery.

Michelle appeared during the Tristar Arc, trying to become the members along with Asami. But as Asami failed, Michelle jumps off the balance beam because Asami is more important than joining Tristar for her.

Michelle is a common western name that is of French origins and is the feminine form of the name Michael. The name translates into "Who is like God?". 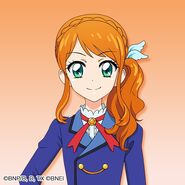 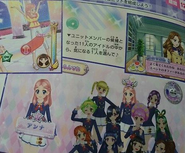 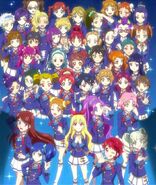