Start a Wiki
Masquerade is a legendary top idol unit seen in the Aikatsu! anime series. The unit also participated in Data Carddass Aikatsu! at Ciao Summer Festival 2013 in Ōsaka and the 6th collection.

Their singers are Risa and Eimi, who are not STAR☆ANIS members.

Masquerade is a top idol unit consisting of Miya (Ringo Hoshimiya) and Hime (Orihime Mitsuishi), who disbanded about 20 years before the story.

The unit began when Hime, coming from a high-class family who didn't want to reveal who she was during the auditions, so she used a mask to cover her eyes. When Ringo came to the same audition and found the mask, she was led straight to Orihime and was deeply moved by her beautiful singing, so she sang with her. Later, after the two passed the audition, Orihime ran after Ringo, stating that they should form a unit. After that, Ringo wore a mask as well and thus, Masquerade was born.

Their top achievement comes from their movie Stylish Thief☆Swallowtail and their song Wake up my music. At the end of their last concert, Hime removed her mask to reveal who she is behind the mask: Orihime Mistuishi, who became the headmistress of Starlight School. Miya, however, didn't take off her mask to reveal who she is it was until 20 years later, in Episode 47, Miya revealed herself to be Ichigo's mother.

It was later revealed that their reasons for disbanding was to focus on their futures. Ringo stated Orihime got a contract to be Starlight School's Headmistress, while she wished to open her own bento shop.

The original unit dresses began to release during the period 2015 Series instead of the 2013 Series, and the cards are brandless cards.

For their comeback performance in Episode 47 and 48, Masquerade used special coords made by Spicy Ageha, with one coord released in Part 6 of the Data Carddass Aikatsu! 2013 Series, and the other coord in the promotional collection. 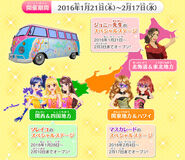 A statue of Masquerade in Starlight School. 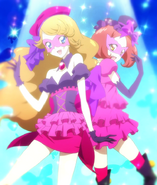 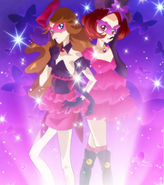 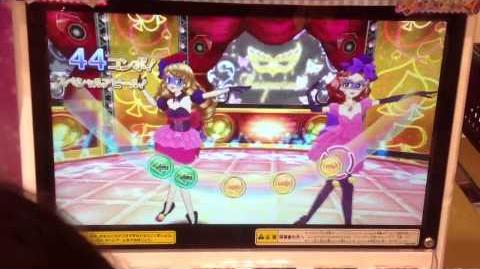 HD アイカツ！ちゃおフェス大阪 マスカレードステージ
Gameplay of Wake up my music featuring Masquerade(Ciao Summer Fes 2013 in Ōsaka).
Add a photo to this gallery
Retrieved from "https://aikatsu.fandom.com/wiki/Masquerade?oldid=258350"
Community content is available under CC-BY-SA unless otherwise noted.