Mascot Characters (ゆるキャラ, Yuru-kyara) first began to appear in the series during Loose Cha-Ran-way!, after Ichigo noticed the charms the girls had on their phones.

She was told by them that the Mascots had become very popular during her time in America.

Potepo (ポテポ, Potepo) is Otome Arisugawa's favourite mascot character.
It looks like an ice-blue potato with long white arms and legs attached to yellow beads and feet. It has purple ears and a silly facial expression. It was attached to the phone on a beaded string. Otome said she found it during her holiday.

Akkumadori (あっくまどり, Akkumadori) is Sakura Kitaōji's favourite mascot character. It is an orange-reddish bird creature dressed in a blue and green themed robe with ropes around it. It was connected to her phone by red straps.

When asked if she had a mascot on her phone too, Yurika produced this little creature from her pocket. She insists it isn't a mascot, but everyone is sure that it is.

It is a purple bat with half-closed eyes, and its mouth open to show it's fangs. It is held by a purple-blue string.

Ran Shibuki's favorite mascot character. Ebi-Pon (えびポン, Ebi-Pon) is a Tanooki with shrimp tempura on it's head. It's lips are usually puckered and he wears a blue onsen apron. She is shown to own many types of Ebi-Pon collectables.

A mascot based on Kokone Kurisu. It is a chibi squirrel with a huge curled tail. It has Kokone's bangs and wears a green hair bow like she does. It holds an acorn and is attached to a beaded chain. She gets angry when people compare it to a mouse.

On the Aikatsu Style merchandise page a poll was held for fans to vote on their favorite Mascots. The top three winners were:

The others fans could vote on were: 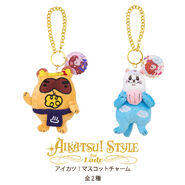 Merchandise of Ebipon and Ozorotter
Community content is available under CC-BY-SA unless otherwise noted.
Advertisement