Marie (マリー, Marie) is Ichigo Hoshimiya's acquaintance when she was in America. She appeared in the third arc of Ciao's version of the manga, also known as the Aikatsu! Secret Story Arc.

Marie has a Japanese father and an American mother. She meets Ichigo when she comes to Japan and receives advice about idol from her.

Marie is a girl with purple eyes and long purple-black hair worn in pigtails. 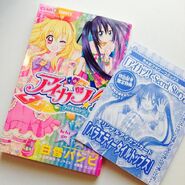 Add a photo to this gallery
Retrieved from "https://aikatsu.fandom.com/wiki/Marie?oldid=239949"
Community content is available under CC-BY-SA unless otherwise noted.