Makina (マキナ, Makina) is the top designer of Swing Rock.

Makina is the top designer of Swing Rock and touring bassist. Before the start of the second season she had met Seira Otoshiro and Kī Saegusa so the former could obtain her Premium Rare Constellation Dress.

Makina is a fair skinned adult with sharp mauve eyes and very pale cerise hair worn loose. Her lipstick is dark coral and she wears dark red nail polish. She wears curled shape earrings and a black corset with a red miniskirt, a choker, black finger-less gloves or sleeves, and knee-high boots. When working she pulls her hair up into a bun.

Makina is shown to be a calm person who gives off a "rock" vibe and has a somewhat informal manner of speaking. She admires and respects Asuka Amahane, as well as people who show a clear backbone. 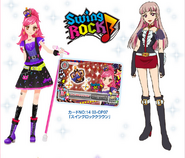 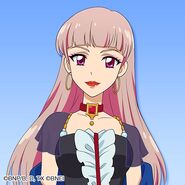