King Leo Coord (キングレオコーデ, King Leo Coord)  is a premium rare constellation coord made by the sexy brand Spicy Ageha. It debuted in Part 1 of the Data Carddass Aikatsu! series and in Episode 57 of the anime.

A gold glittery folded tank-top with a gold band lining the top that has a colorful triangle pattern. Sewn to the middle is a large lime gem on a gold sun base. Three gem shards of azure, pink, and purple hang from it. A gold chain is sewn between each side of the chest. Included is a furry collar, gold bracelets and bangles with gems on the wrists and upper arm, a tattoo on the right shoulder, and a goldenrod sleeve on the left arm that has furry gem cuffs and black string wrapped around it.

A gold, glittery ruffled skirt with an indigo waistband that has detail and a thin belt of gold and red around the top. In the middle is a lime gem with five gems beneath it, coming in turquoise, sapphire, and violet. On the right hip hangs a lion head charm and a furry orange gradient accessory.

Goldenrod peek-toe boots with a gold sole and indigo detail on the foot and heel. A gem design rests on the foot, while black straps wrap around the leg. The ankle and cuff are covered in fur, with the cuff adorned by a lime gem surrounded by smaller orange stones.

A pair of green feathery bird wings tipped in a gradient of sky blue, azure, indigo, and fuchsia. Gold studs line the top portion of wing, and they attached to a gold furry base. The user also gains gold pointy crown adorned by a single amethyst diamond, and an amethyst droplet gem earring. 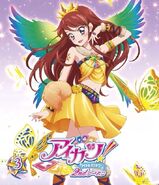 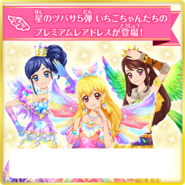 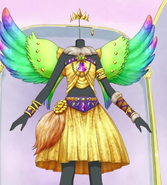 Add a photo to this gallery
Retrieved from "https://aikatsu.fandom.com/wiki/King_Leo_Coord?oldid=228328"
Community content is available under CC-BY-SA unless otherwise noted.