– Kayoko to Hinaki Shinjō in Episode 147

Kayoko is the top designer of Vivid Kiss.

Kayoko lives in LA and is the second known designer to have brand based outside of Japan.

Kayoko is a fair skinned woman with slanted blue eyes. Her long green hair is worn back in a bun with a few loose curls or ornament, and she has straight cut bangs and curled, shoulder length forelocks. She wears red lipstick to match her nail polish, and often dons a white sun hat.

Kayako is shown to be an energetic and outgoing woman. Out of habit she uses the term "legit" and is commonly seen speaking in a manner reminiscent of a valley girl or surfer, exemplifying the fact that she's from LA. She's known for being very strict in terms of what she deems fashionable, hinting that her standards in fashion are high. 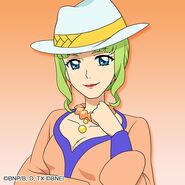 Retrieved from "https://aikatsu.fandom.com/wiki/Kayoko?oldid=224267"
Community content is available under CC-BY-SA unless otherwise noted.