A dark viridian sleeveless top with a band of viridian and dark blue diagonal stripe going down the middle lined in gold to accent the four buttons sewn to the middle. The bottom is lined in gold and around the top of the chest is a pink-peach flap with gold lining. Beneath the chest is a pink ribbon lined in four, with a four-piece bow on the side and medallion at the center. White mesh covers the collarbone and neck, with the collar lined in gold and adorned by a ruby gem on each side, connected by a pink bead chain. White gloves are included with a striped cuff lined in gold, a ruby gem button, and trim of white ruffles.

A pale gold and peach argyle skirt with a pale yellow petticoat. Over this is a dark viridian pleat skirt cut at an angle to be longer on the left, adorned by two gold lines around the bottom and a pattern of pink and cyan hearts, each with a D or C and a crown on it. The waistband has a row of gold pearls around the bottom, and a pink bead chain wraps around the left side, adorned by colorful gem, key, and crown charms.

Striped booties with gold sole and a pink chunk heel and toe. Across the foot is a row of gold pearls, and at the center is a four-piece bow. The argyle flapped cuff has gold lining. Included are bubblegum stockings with a gold bow and stripe around each thigh. 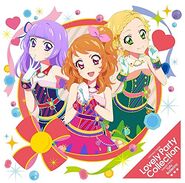 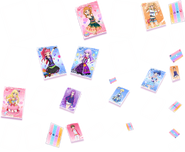 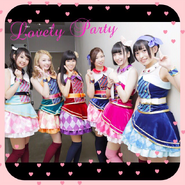 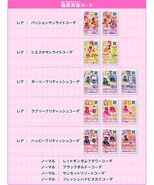 Retrieved from "https://aikatsu.fandom.com/wiki/Girly_British_Coord?oldid=258033"
Community content is available under CC-BY-SA unless otherwise noted.