A sleeveless white top with buttons surrounded by frill strips. Beneath the chest is a black band with three gold buttons and one single lavender, attached to a garnet-colored bow that has a gold bell hanging from it. The skirt is a red and black diamond tile pattern with a frilly petticoat. Glittering orange to red gradient fabric is sewn over the hips and back, shaped like coat tails. A gold tassel hangs from each hip, and on the left is the Capricorn logo. A matching colored pointed shawl is worn around the shoulders with two gold chains attached at the center. The black collar is lined with frills and has a red rose at the center. Above each elbow is a red strap with a purple bow and trim of ruffles.

A glittering pair of orange to red gradient boots with a gold sole and chunk heel. The pointed black cuff surrounds a six-point garnet gem beneath it. On the left lower corner is the Capricorn logo. On the left ankle is a gold chain with a single tassel hanging from it. 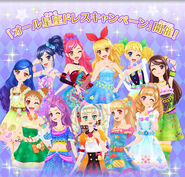 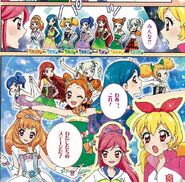 Add a photo to this gallery
Retrieved from "https://aikatsu.fandom.com/wiki/Garnet_Capricorn_Coord?oldid=230646"
Community content is available under CC-BY-SA unless otherwise noted.