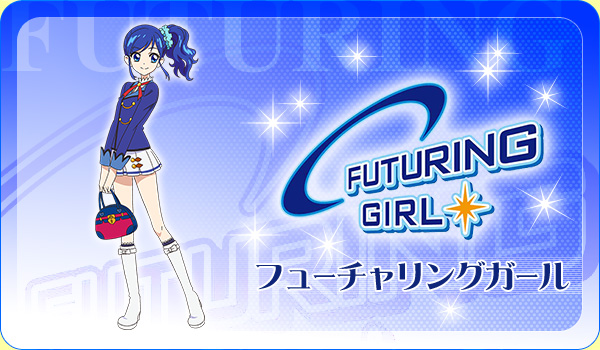 The designs of Futuring Girl have a futuristic dance theme around it. It makes wearers look stylish with cool colors and bright hues.

Be more original, be more pretty. Let me show you my own future nobody has ever seen... The brand featuring brilliant materials and smart shapes, just like dresses worn by models come down from a time machine... it's Futuring Girl. Please enjoy the future-styled dresses and have both stylishness and prettiness.

The top designer was unknown until Episode 40. Aoi mentioned in Episode 9 that he's a nice person and has watched all of her performances, and appreciated her so he let her have the "Milky Way Cosmic Coord". He also seems to have a connection with Naoto Suzukawa as in Episode 7 Naoto has the rare cards of the brand and he gives them to Aoi. In Episode 40, Futuring Girl's top designer was finally revealed as Rei Kamishiro.

While discussing Kirakiratter with Ichigo, Aoi receives news that the Pon-Pon Crepe Campaign Girl auditon is approaching. She signs up right away and shares the news with everyone on the blog, while showing Ichigo how it works. However, after finding out Ran would be entering the chances of her winning became slim. In hopes of gaining encouragement and advice, Aoi spent the next few days talking with fans through KiraKiratter and attempted several bizarre training methods; ranging from walking on the balance beam, walking on a chalk line with buckets of water, balancing books, and even performing aroma therapy with strange objects decorating the dorm room.

At first Aoi didn't know how distant she had become until she ran into Naoto, who questioned the credability of the people she gets advice from. Before taking off, he handed her the Prism Cyber coord set, which Aoi used to perform and win the audition, becoming the next Pon-Pon Crepe Campaign Girl.

Aoi, Ichigo, and Ran are tasked with participating in their very first Special Audition. They learn about Premium Rare cards from Ran and get more info from Johnny - who explains to obtain the Premium Rare cards the idol must be approved by the by the Top Designer. To help out he sets up a meeting for each girl to meet her favored brands top designer, with Aoi getting an appointment to meet Rei Kamishiro.

It is revealed by Aoi that he has watched all of her performances up to this point and appreciates her enough to bestow her with the Milky Way Cosmic coord.

As the girls were preparing for the Christmas Party and the Special they were chosen to perform for they went off to cheer up a classmate, Yuna Nakayama. While all of this was going on the girls were being watched by a man who comes from the network that will be broadcasting the Special later on. He would then show the broadcast as the girls are preparing to go change, only to be stopped by Orihime. She congratulates the girls for doing such good work by gifting them each with a special coord from their favored brand to use for the performance. For Aoi, she is given the Pilot Girl coord.

For her auditions into Tristar, Aoi used the Cosmic Milky Way and Sparkling Noir coords.

In due time, Soleil was tasked with making an announcement regarding STAR☆ANIS' tour that will be approaching. Aoi and the rest of Soleil go to relax until Johnny sends them a video informing them that they will have to use this time preparing for a Special Audition and as this goes on, Aoi hears about a brand new Futuring Girl Premium Dress. She arranges another meeting with Rei until Orhime informs her that they may need to cancel the announcement for the dress because Rei has locked himself away from everyone else. But in hopes of getting him to reconsider Aoi is sent to try to get him to come out.

In this time she spots the Kaleido Mirror coord and sees a poster of Guppy, an Idol favorite of hers in the Sparkling Green coord. She finds Rei and the shell he has chosen to hide himself in and discusses meeting Ichigo. She mentions her reasons for becoming an idol, then explains why she loves Futuring Girl so much. These words move Rei and he decides to come out and gives Aoi the Premium Dress as thanks. She would then change into it and goes on stage to perform.

The Starlight Queen Cup is announced and Aoi is one of the girls chosen to take part in it. In this time she learns about Masquerade and Mizuki's past while training.

As the day approaches for the first round, Aoi reveals that she got a lead role in a movie and has been promoted from Naughty Detective to Naughty Inspector. While discussing it she is shown wearing her Futuring Girl coord for the role. Later when the performance arrived she wore the Kaleido Mirror.

A Lack of Confidence

After rumors began surfacing regarding the Futuring Girl's Premium Constellation Dress, Aoi is chosen as it's wearer and will put on a concert to show it off. This will be a test to see if she can perform the Constellation Appeal, but Aoi is unsure if she can or not, then frets over being unnoticable when she gets compared to Water.

The girls try to help Aoi feel better by giving her some tips and encouragement, but when nothing seems to work she decides she must go further out. She has to shine by herself and to do this she decides to take a trip out to the mountains for some training  While she thinks about her weaknesses and her lack of a bold personality, Aoi is tested to her limits when things begin to go wrong. She is joined by Ichigo soon after and with some more encouragement, looking at the positives when it comes to Water, and this cheers Aoi up.

When the day of the performance arrives, Aoi performed wearing the Premium Constellation Dress, Crystal Aquarius.

Orihime comes by to inform Aoi that she was requested to produce, direct, and star in her own music video for the Brand. Rei explains that he chose Aoi because she is able to understand the brand the most out of everyone and has faith in her idol knowledge. At first Aoi was unsure of what she wanted for the video, although she knew the importance of showing both herself and the brand in it.

In hopes of getting ideas she looks through many Futuring Girl coords while listening to music, then she goes off to present her ideas the following day. She is then tasked with deciding which coords to show-off in it. She picks the Lucky Pilot because while it is simple, it shows off the style for the brand. Then she wishes to include the Crystal Aquarius to show off the diversty of the brand, along with Prism Cyber, which simply can't be left out.