The script was written by Yuka Yamada.

With summer vacation beginning Akari trains in an attempt to pull off another Special Appeal like before. But when Orihime and Johnny see her struggle they suggest she joins Johnny's "hot" training camp!

Akari returns to the dorms after running on the track to notice Yuu preparing to leave for summer break. They chat as Akari brings up that she will be heading home soon, then tells Yuu to have fun.

Akari heads out to the trampoline to continue training but she struggles trying to practice her special appeals. As she begins to complain she is joined by Johnny, who starts to jump with her and shows off a few poses he has learned. He then announces his very hot training camp and how she has been automatically signed up for it and as a final test will need to do a special appeal.

In Orihime's office Akari is brought in to speak to her. She mentions how Akari needs to focus on improving her practical skill, and how since entering her relentless training has paid off in terms of physical ability, but her song and dance still has a long way to go. She shows Akari the appeal she performed with Ichigo recently until Johnny brings up how odd it is that she hasn't been able to do another one since. Akari explains that she only managed to pull it off because of the overwhelming happiness she felt performing with Ichigo- and she isn't even sure how she did it. Orihime points out to her that special appeals are are important for performances and she must learn to do it on her own. Akari isn't very sure she will do well but she doesn't plan on giving up. She made it through Aikatsu Boot Camp and has been training daily, she must progress to reach her goal.

Back in the dorm Akari is disappointed to see Yuu has already left, but she is distracted after getting a message from her mother, who explains how she purchased a watermelon to celebrate Akari's home coming. Akari has no choice but to tell her of her change in plans though, and she understandingly wishes her luck. Akari promises to do her best and promises to come home once training ends, then she hangs up to get ready to exercise. Only to stop and admire the picture of the watermelon her mother sent.

Akari runs outside to see Ichigo, Aoi, and Ran, who are preparing to leave for home. She approaches to speak to them, only to reconsider and run in the opposite direction.

Later, Aoi and Ran thank Ichigo for seeing them off at the air port they were taken to. She brings up the lesson she will be heading to with Seira, but she really wanted to come to give them support, Aoi with her brand new Naughty Police Chief movie and Ran, who will be making a guest appearance on it. She will be playing the mysterious female spy that Aoi will meet. Ran feels relief in knowing Aoi will be there to help her out before remarking on how impressive it is, then they take off. Ichigo prepares to leave when she spots an ad for the approaching Twinkle Star Cup.

The next day Akari gets up to prepare for training camp but stops to get some breakfast. She meets up with the other girls who have also been recommended for it and Johnny approaches, deciding to get them straight into it. They start with bends and stretches, then they go for a jog and go through a training course before being brought to the trampolines.

There, Johnny asks the girls what the three key points in performing a special appeal are, which are revealed to be height, timing, and posture. Akari makes sure to remember this and Johnny demonstrates for them his own special, super rare appeal- with impresses the girls as he tells them to take turns performing their own. One girl does so well that he allows her to leave, and eventually Akari's turn arrives. She nervously approaches but she struggles to pose properly, causing him to point out that she is too tense, so her body isn't posing naturally, which messes up her height. He suggests that she focus on timing and explains how the appeal must match the rhythm of the song; if even a fraction of a second off, it will mess her up.

The next day Akari has breakfast and returns to training, where Johnny asks the girls to start shouting out before they resume training. They do as ordered and repeat the prior days training and this time, another girl is able to perform her appeal, which causes the other girls to express their own eagerness to try- only for Akari to mess up again.

Later on that evening, a bunch of the girls leave the trampoline having pulled off their own special appeals, but Akari remains, just barely doing any better. Johnny is surprised to find her still there and it's revealed she is the only girl still there who has yet to perform one. He then reveals that her mother sent the watermelon as a present, along with a note, and Akari happily reads over it to find out she actually bought a second watermelon and sent that one to Akari. Johnny takes it outside and by using the Melonkatsu, he divides it for her and they sit down to eat it together. He asks that she thank her mother on his behalf before expressing that he and Orihime are aware of how much she has been trying since she joined the Academy, but trying doesn't really matter. She can either do it or she cannot. For her to perform a special appeal she needs to polish all of her idol abilities, and it may just take her time to reach this level. But those who can't perform an appeal wont even be considered an idol so it's vital that she masters it.

Feeling concerned over her idol future Akari returns to the dorm for the night. She isn't sure what else she can do to improve, but suddenly she notices a picture of the Twinkle Star Cup. She remarks on how much harder their Aikatsu world is in comparison to hers, but win or lose they still try their best.

Meanwhile, Ichigo and Seira have just finished training when Ichigo notes how they have improved. Seira agrees before asking her if she wants to come and hang out and they leave for her place to find Johnny there. He found out where they were heading and he quickly brings up that he wanted to speak to her about Akari, causing her to worry as he explains how much she struggles with special appeals. She was able to perform it at the Boot Camp but not since, and yet somehow Ichigo was able to pull one off without even knowing what it was during her entrance exam. Seira brings up that Ichigo even performed the Constellation appeal after returning from America without even knowing about them as well, and because of Ichigo's intuition, Johnny was hoping she could lend Akari some support.

Late into the evening it is revealed that Akari has returned to the trampoline. She gets slightly better, but she fears that she isn't destined to stay in the Idol world at this rate. 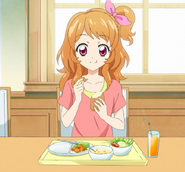 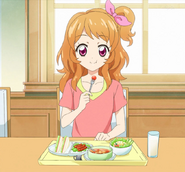 Retrieved from "https://aikatsu.fandom.com/wiki/Episode_96_-_Let%27s!_Akari_Summer!?oldid=260201"
Community content is available under CC-BY-SA unless otherwise noted.