View source
watch 01:54
Obi-Wan Finale - The Loop
Do you like this video?
Play Sound

It's now March, the graduation day of the Junior High Division of Starlight School has finally come for Ichigo and her companions. On such an event, Ichigo, Aoi, and Ran were given the task to make the graduation album by Headmistress Orihime. With their memories being immersed, they have fun choosing the photos, and the graduating students have their own deep feelings each, then Sakura, the second-year who saw those sad faces…。

One day Ichigo is out taking a walk when she is informed that she, Aoi, and Ran will be preparing the special album for graduation time. While this is an honor they aren't happy about the news since it reminds them that they will be leaving middle school. Orihime explains how important Graduation is though, and how they must keep going and see it all with a smile.

At the fountain the girls begin to recall fond, past memories while trying to convince themselves to stop feeling sad, and they attempt to brainstorm how the album should be done. Aoi suggests they should start collecting pictures and after agreeing, they reunite with the others to inform them of their idea. None of them seem to be very happy about it either, although Kaede claims that this is just another thing to overcome. Aoi takes a picture of everyone and Ichigo calls Raichi, asking him to send some pictures for their album as well, He agrees, and while he and Ringo look through them, she remarks on how it feels like it's only been a day since Ichigo started to attend the Academy.

After they go through the boxes of photographs Ichigo asks why Otome has so many of her in the fountain- with Aoi revealing that due to how frequent it is, she decided to start a series- although most of them did occur while Ichigo was in America. She then finds a picture of Yurika looking worn out from when she had been bitten by a mosquito, and how it had gone viral with her fans, along with the time Kaede cut up an angler fish, which may have been scary but it made a great dish afterwards, followed by Shion competing in a pig rodeo. However, while Ichigo is highly curious about each situation, Ran points out that they have no time for this as they find several pictures taken with Ichigo's rice scoop. Aoi brings up that as she left it behind, it was passed around the school and became everyone's good luck charm.

Meanwhile at Dream Academy, Seira, Ki, Maria, and Sora are working on their own album. Seira brings up the others from Starlight Academy and Maria wonders if a special concert will be held when Ki informs them that a graduating student performs with a student who is still at the school.

The next day, the girls have finally sorted out all of the pictures through each class, with Aoi curiously counting how many times everyone appeared. Yurika is delighted by how it looks and promises that she will continue to look at it after the event and praises the others for their efforts. Aoi claims that the hardest work is actually keeping themselves from becoming nostalgic, otherwise they wouldn't be able to focus and finish. Suddenly, Otome spots a picture of her and Aoi during their time competing in the Starlight Queen cup. After seeing the rice scoop Ichigo asks about it again, and they admit to how they both used it. They also see a picture of Ran holding it during the time she tried out for Spicy Ageha muse and wonder where the rice scoop could be now.

It's then they find a mysterious picture of Mizuki holding it behind Otome and Kaede, and they recall how she held it during one of their group events, praying that the next day would be nice and sunny for everyone. This causes the girls to wonder what she may be up to now, since it's been a long time that they have seen her, but while they are sure she may be busy, they would like for her to look through the album anyway.

As this is going on, Sakura stands alone from the hall and observes her friends.

The following day, Ichigo runs across Naoto while on her way to see Ran and Aoi and brings up how she just finished work and is meeting up with them. She expresses joy in seeing them and they resume sorting pictures. By now they have reached the point where they first entered Starlight Academy, and Ichigo recalls how they were often times late and Ran usually scolded them for it. But before they can continue to think of the past Aoi reminds them that they really need to finish.

Meanwhile, Seira finds Ki observing pictures of Ichigo, Aoi, and Ran as well. Ki suggests that they should set a little dedication area for them as well, due to their friendship with them.

Now late in the day, the girls continue working as Kaede and Shion arrive, bringing tea and food for them. Everyone sits down to take a break and Kaede compliments their efforts as well, with Shion wondering if it's difficult- but while they are graduating, and it isn't everyone that is moving on up to the high school division either. They may not see some girls again now, and may be too busy to be with each other; such words causing the mood to momentarily become somber until Ichigo points out how wonderful the past few years were. Ran then suggests that because they reached a good stopping point, they should go and show Orihime now. Aoi and Ichigo agree and gather their items.

In the hall they come by Sakura, who is in the middle of rehearsal with some other students. Aoi brings up that this will be taking place during graduation, causing Ran to admit how difficult it is for her to handle sentimental events. The other two tease her as they reach the office and show Orihime their work. She compliments them and tells them  to remain a wonderful upper-class to the students in the grades below them.

Eventually Graduation approaches, and everyone heads into the auditorium. It is announced that the returning students have words for the graduation class and they walk on stage as Johnny remains in the background crying his eyes out. They all give messages to everyone and Sakura takes her turn- but she finds herself suddenly choked up and begins to cry as she thinks about how she won't see her friends as much anymore. This causes everyone to express concern, worried she might not be able to finish, but after receiving encouragement Sakura calms down and is able to finish her statement. Everyone applauds for her -with some students crying as well- and Otome gets up to thank the returning students as her role of Starlight Queen.

Together, everyone stands up for a final cheer before Johnny announces that it is time for the concert to be taking place between Sakura and Otome. The duo change into their current school coords and appear on stage to perform Original Star☆彡. During the performance Sakura momentarily finds herself choked up again, but with Otome she is able to calm down and continue; with Otome only fairing slightly better as she begins to tear up towards the end.

Afterwards, everyone cheers for the girls and they leave the building. Ichigo, Aoi, and Ran find Sakura outside with the rice scoop and Ichigo tells her to keep it for now as a sign of good luck. She admits to her worries of not seeing her friends as much anymore, but she feels better after they point out the High School division is right behind the middle school. With that they begin to observe the nearby trees and comment on how they will need to keep working hard as growing Idols. Someone is shown taking a picture of them and adds it to their album. 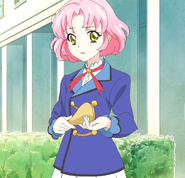