It's almost Setsubun and Starlight School is busy in preparation of the event. But when Ran decides to enter she tries to choose between being her self or offering something that will please others- even if she doesn't like it.

Ichigo, Aoi, and Ran are being interviewed by an older woman who asks them if the girls of Starlight Academy are celebrating Setsubun at their school. They confirm that they are and Ichigo mentions how they had Ran play the role of the demon the other day; causing Ran to get flustered and start to bicker with her. Aoi changes the subject and Ichigo brings up how much she enjoys eating ehomaki- causing the woman to guess that her love of food has to do with her energy. She goes on to ask the girls if they like cooking, and they bring up the Hoshimiya bento shop. Ran explains how she learned through her grandmother, who taught her to only use good and healthy ingredients.

Later, back at school, Ran busily works on cookies when Aoi and Ichigo rejoin her. Aoi explains where the name of the event came from, along with who Toshitokujin is. Ran mentions the ehomaki eating rules, such as eating it all at once, and how you shouldn't speak while eating it, and they watch as Ichigo eats a cookie. They notice her response and bring it up but she insists its nothing important as Ran continues chatting about hanging out these homemade treats to the fans. She sniffs the cookie before trying one, deeming it to be fishy as Aoi recalls how Ran eats healthier foods. Ran brings up the phrase "you are what you eat" and uses Ichigo's love of parfaits as an example- although Ichigo is unable to figure it out.

Later that day Orihime fills the students in regarding the upcoming audition for the Ehomaki Image Girl. The audition involves everyone making their own ehomaki to be eaten by the judges, and the top two winners will perform in a fashion show to make the final decision. As the assembly ends, Johnny gives his own words to help inspire everyone.

Outside, Ichigo expresses joy in getting to have ehomaki with everyone until Aoi reminds her that they need to be serious, then recalls that both she and Ichigo will be too busy with work to participate. Ran, being the only one with nothing scheduled that day decides to enter, with the girls promising to wish her luck and cheer her on that day. She tells them that they can be of more help while she practices though, and they agree to do what they can for her.

At the Hoshimiya bento shop, Ringo and Raichi are helping Ran, and bring up that with it being a slow period, she can use the kitchen. Raichi asks to take pictures for his Aikatsu Newspaper as Ichigo asks how one makes an ehomaki. Aoi brings up that no single sushi roll is called this; rather, ehomaki is considered any type of sushi roll eaten on Setsubun while facing the lucky direction. With that, Ran asks Ichigo to help her make the vinegar rice as Raichi begins to take his pictures. As Ran makes the rice Ichigo explains how the water gets dumped, but how you need to save some of it for the cooker. It then gets loaded into the cooker for about an hour. She then brings up making rice for sushi can be more difficult then just plain rice, and how when adding vinegar how it isn't proper to stir the rice, but to slice it while fanning it to add a gentle gloss.

As they finish, Ran comments on how much Ichigo knows as a chef before moving on to the seaweed. Ichigo explains that sometimes seaweed has to be roasted, but not always because most of it bought in store is already pre-roasted. As Ran realizes the name makes sense, Aoi points out that Seaweed is roasted to usually bring out the flavor, and Ichigo mentions that there is no one true way to do anything, which is why cooking is so much fun to begin with. Aoi also brings up the mentioned rules earlier and adds that one of the typical rules for it is actually just using seven different ingredients to correspond with the Seven Lucky Gods. This makes Ichigo realize that this is just like picking out coords and Aoi suggests something flashy. Ran keeps this in mind while deciding what to add to her sushi, settling on Wakame Stalks, Hikiji, and Wakame for on top- along with some fish. After she finishes she asks Raichi to try it and he likes it, deeming it to be very healthy. Ran considers it to be a success.

Meanwhile at Dream Academy, Seira and Ki are watching Sora as she prepares her own ehomaki. They express curiosity due to its uniqueness, and after trying a bite, Ki finds herself delighted by the results and wonders if Sora has already won the audition at this rate.

Eventually the taste test rolls around and Raichi shows up for pictures. He finds Otome handing out waffles while Yurika serves pancakes to her fangirls, and Sakura hands out flower cookies. After locating the girls, they comment on how the cookies fit Ran's personality and remark on it's healthiness. However, Ran is aware everyone else seems to be getting a lot more business then her, as well as the curious expressions people keep making as they try her food. She thinks back to how Aoi suggested she tries to use flashy ingredients and wonders if maybe she messed up.

Frustrated, Ran returns to school as she listens to how well Aoi and Ichigo's snacks did. They try to suggest that people did like her cookies, and she asks them to help coach her a final time. While they agree they worry something happened, and Ran explains how she thinks that by making something flashier she will be able to please more people.

She works hard to make more sushi and has them try it, and the girls claim that it is really good and seem to enjoy it. While she feels better, they notice how frustrated she is and they begin to worry over her.

Later that evening, Ran tries to think up something while sitting at her desk. She then sees a picture of her grandmother and herself when she was little, causing her to think back to the past.

The next day, the recording for Forest-Forest Girl, Mountain Girl, goes on break. Ichigo is really hungry now that they finished, causing Aoi to ask if she comes to do work or just eat. Ichigo assures her that it was for work, but she enjoys bento the best outside under a clear sky. As they get up to enjoy it, they suddenly notice that Ran has gone missing.

Deeper into the forest, Ran had been so busy with her thoughts that she finally realized she has been separated from them. She calls out to them, but gets no response other then hearing a bush nearby start to shake. She worries it may be a bear and prepares to fight, but to her surprise she finds Sora, who appears just as surprised and asks if she knows a way out of the forest.

Back on filming location, Ichigo, Aoi, and the staff try to find Ran.

Seeing how late it is, Ran and Sora hide in a nearby cave and build a small fire for them. Sora reveals her plans of entering the contest and mentions arriving to the mountain forest for inspiration, but she got lost soon after. Ran relates, bringing up how she came here to do the same. All of the sudden she feels hungry and Sora gets up to leave, asking her to remain there for some time.

Aoi and Ichigo continue looking for Ran when Ichigo asks what the lucky direction for this year. Aoi brings up "a bit right of east-northeast", and she quickly runs off.

Sora is able to make an ehomaki using ingredients she found outside, surprising Ran as Sora reminds her of the ehomaki rules; to eat it in one go and not speak. Ran asks her if this will be the one she enters in the contest and starts to eat as Sora brings up "there is no one correct way" and how it is comparable to a coord. The coord you put together should be the one you believe in, and the same can be said for ehomaki. Ran compliments the ehomaki, pleasing Sora as they hear Ichigo and Aoi yelling from outside. They come out as the girls approach, and Ichigo is relieved to see that Ran is safe- although they are surprised to find Sora and Palm, her pet bird, there.

Soon the Next-Gen Ehomaki "Yeah! Hoo! Maki" image girl audition comes. Johnny is excited to see who wins, while Orihime points out that the standings will also determine the luck Starlight Academy will have this year. First comes the eating contest, where everyone shows how well they can eat the ehomaki- with Otome speaking out, causing Yurika to chastise her, followed by Sakura who points out she just spoke. As they panic realizing they have been eliminated, Ki is next to join them.

Next is to use the ehomaki like a microphone and perform with it, and only Sora and Ran have managed to pass the round, along with two other girls.

Back in the waiting room, as Sora and Ki are speaking with Seira when Ichigo and Aoi notice how down Ran appears to be. They ask how she is doing and express joy knowing she is doing so well, but now she is worrying since she has to make the ehomaki. Before she leaves, Ichigo encourages Ran to just be herself.

Ran works in silence while thinking back to what her grandmother used to tell her and as the judges approach they quickly bring up how plain and uninspiring it looks, making her worry further until one recognizes the variety of healthy items she used. He is excited to see how much consideration for health she put into making it, and they each try it, being reminded of their grandmothers.

Soon the results are announced, and it is revealed that Ran and Sora will be moving onto the final round. Everyone cheers for them while Sora congratulates her and comments on how happy she is to get to partake in the fashion show with her. So the girls get changed and appear on stage to perform "Kira・pata・shining".

Afterwards it is later revealed that both Sora and Ran were both chosen to be the image girl due to how well liked they were.

At the Hoshimiya Bento Shop, Ichigo, Aoi, Raichi, and Ran are eating some of Ringo's own ehomaki when Ran comments on how good it is- only for Ichigo to scold her for speaking, followed by Aoi scolding her. This makes all three of them start to laugh.

Elsewhere stands a girl who is trying some of the ehomaki. She compliments it and mentions that Elizabeth will have to try it some time. 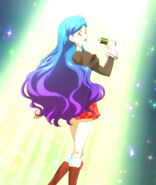 Add a photo to this gallery
Retrieved from "https://aikatsu.fandom.com/wiki/Episode_67_-_Fortune_Compass%E2%98%86?oldid=227352"
Community content is available under CC-BY-SA unless otherwise noted.