For working so hard, Orihime gives STAR☆ANIS a day off by renting out part of a water park! But as the girls relax they find themselves surrounded by fans and decide to make a day of it.

Ichigo, Aoi, and Ran are waiting at the bus stop that will take them to a water park. They think back to when Orihime gave the group this news, informing them that they deserved a break from all of their effort and hard work. She managed to rent out a part of the water park that's about two hours away.

As the three arrive, they find Sakura and Otome there waiting. Aoi brings up that the girls of Tristar will be late due to their work they had scheduled, and the five girls head inside.

Having changed clothes, Ichigo and Otome attempt to run off and play until Aoi stops them to remind them about the importance of stretching. She also takes advantage of this moment to get some pictures while Ran observes them. She notices how covered up Sakura is and questions this, with Sakura admitting that this is the first swimsuit she chose for herself, and she isn't sure if it fits her. Ran insists that she takes off her towel, then compliments it. After Aoi takes a picture of her, she has Ran get closer so that she can get a picture of them together.

Meanwhile, near the pool Ichigo and Otome have been doing crunches. But Ran informs them that they need to stretch their muscles to avoid getting cramps later. They do as instructed and start with a game of volleyball. This is followed by water slide races, then laying around to unwind for a while.

Suddenly they hear a song playing over the radio and Otome becomes inspired for a song, so she runs off in order to write it down. As Ichigo informs them of the time, Aoi notes that Tristar should have been there by now and wonders if their work ran late- only for Yurika and Kaede to arrive and mention that Mizuki had been called off for last-minute radio work.

At this is going on, Orihime and Johnny are shown to be on a nearby beach. While he expresses surprise to see her there, as he didn't know about her taking a break as well, they quickly get into a discussion.

After finding the message from Mizuki informing them of her last minute plans, the girls call Honoka to ask how much longer she will take. She explains to them them as long as there isn't any difficulties, about thirty minutes. Depressed knowing Mizuki might not even be able to make in time, the girls begin to feel sad until Kaede reminds them that by moping around, they're just wasting the time they have left to have fun. Yurika asks what they should do now and Otome suggests they race down the slides again, while Sakura and Ran would rather visit the hot spring located there. Before everyone can separate, Aoi claims that as Idols, there is one thing they need to do as Idols- and that is a Sporting Competition.

She explains how much of a staple this is, with variety shows often doing these things with celebrities and Idols. She also points out how they should have one there and brings up the rules, deciding to make a large seaweed bento for the winners. Yurika decides it isn't worth competing for though, after Kaede raises the stakes by bringing up that the winners can earn a viewing of Tristar's busy daily life. She points out how this also has no meaning to her- until Kaede raises it even further by suggesting the winners get a kiss from Mizuki. Aoi immediately decides to enter, while Ran claims they would need permission first. But Kaede thinks it will fine if it's only a greeting kiss. Yurika decides to enter, but she claims this would only be for the chance to suck Mizuki's blood.

As she is working on the radio program, Mizuki is going over some fan letters and responds to them while Ichigo calls again to ask if she's almost finished. Disappointed by the answer she hangs up as Aoi reveals that the teams have been decided: Ichigo and Otome, Ran and Kaede, and lastly, Sakura and Yurika. As the girls prepare for the obstacle race, they don't notice two girls walk by and watch them.

As her show comes to an end, Mizuki is asked to sign some autographs and Honoka decides to bring them with her. In the car, she discusses how the girls kept calling to find out when Mizuki would be coming, and Mizuki expresses remorse in knowing this, asking her to drive carefully so that she can focus on her autographs and avoid making them messy. Honoka points out that this would make them unique though, and Mizuki agrees.

As Kaede and Ran win the first event, Otome and Ichigo are shown to have come in second. They move onto the next round unaware of the people gathering to watch them. Just as they finish the second round, they become aware of Mizuki suddenly showing up; along with the several fans. At this point the girls are concerned about things getting out of control when Mizuki effortlessly leads them by suggesting they perform a concert in secret- to make the fans happy. The girls agree and run off to change into their coords, reappearing on stage to perform Hirari/Hitori/Kirari.

After the performance ends, they change back to their bathing suits and Mizuki asks the fans not to post any of this on Kirakiratter. But just then, the girls are disappointed when someone over the speaker reveals the park will be closing now. Only for Honoka to arrive and reveal that she was able to get them some more time for themselves.

Delighted by this news, the girls resume playing until they take a break, then go down some slides. Before Ichigo and Mizuki go down the slide, Mizuki comments on how happy she was to sing with everyone again. She also mentions that while Ichigo is shining differently then her, she isn't allowed to shine in the same sky as her just yet. Ichigo takes this as a friendly challenge and claims that some day she will reach her level as they head down the slides.

Soon everyone's fun at the water park comes to an end. The girls are worn out and sleepy by this point but they get distracted when Yurika points out that they never figured out who won their competition. As Aoi realizes this, Mizuki asks them what they are speaking of, only to scold Kaede after she explains everything. She tells her not to bet others people's bodies so carelessly, especially without consent, causing everyone to share a laugh. 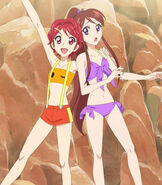 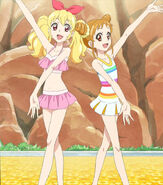 Retrieved from "https://aikatsu.fandom.com/wiki/Episode_45_-_Happy_Summer☆Vacation?oldid=225652"
Community content is available under CC-BY-SA unless otherwise noted.