As STAR☆ANIS' tour concludes, Orihime announces there will be one more secret live concert; taking place on a cruise ship with a hundred fans. In this time, the girls learn about bonding with their fans on a personal and new level.

As the girls relax on the tour van, they express joy with all the fun they have had so far. When it's pointed out that they're about done, they begin to feel depressed. Ichigo calls Ran out on this and she apologizes before they are joined by Orihime, who has come by to inform them of the final performance they will be holding: a secret live that had one-hundred tickets for fifty pairs, two people each, sold at concert halls and CD shops.

While the girls think this is a downgrade from their previous performances, Mizuki points out that they will be closer to their fans- and suddenly they hear a strange sound. Sakura moves the curtain to see that it got really dark outside, with Otome pointing out that it's only afternoon currently. As the girls exit from the van to try to figure things out they find themselves surrounded by several cars and approach the nearest doors to find all one-hundred fans waiting for them on a boat.

After telling the fans how lucky they are to have gotten these tickets, she tells them to have fun and enjoy themselves while the boat sails to Tokyo. Mizuki also gives a speech while the girls stand on stage, then they head off for another area to have a quick staff meeting regarding the performance. She suggests they all combine their songs during the middle into a medley so that they will have enough time to get through them all, and the others agree, with Aoi complimenting her on how she always remains cool. The others also agree with this but she insists that they don't need to flatter her.

After getting their schedules the girls are surprised- including Mizuki. All of their appointments seem to be catered to the fans, there isn't anything listing practice at all. Suddenly Mizuki realizes that their secret live has actually started since arrival, and Orihime confirms this by appearing, explaining how this is indeed more than just a concert, but a chance to interact with the fans. She wants them to see their Idols for what they really are, although the option is theirs. With that she heads off and with the meeting over Mizuki takes off as well.

The girls seem confused and Ichigo questions why she's suddenly acting weird, expressing concern as Aoi and Ran point out that it can't be helped, and they take off to attend to something as well. Ichigo then overlooks the nearby group picture of them all and mentions to herself that she doesn't want their time together to come to an end.

Meanwhile, Otome and Sakura are sharing a snack while discussing the tour's final event tomorrow, and how this experience has been good for them. Although they are excited to return back to Powapowa Puririn. As Yurika is awake, it is revealed she is outside, enjoying the fresh air.

Later, Ichigo approaches Aoi to find her in the middle of autographing some coasters. She explains how she though it would be a nice gift for the fans tomorrow, and suggests that Ichigo find something to do as well. After Ichigo happens to observe a handkerchief she remembers that it belongs to Kaede and goes to return it, but she feels badly for interrupting her in the middle of preparing for bed. Kaede isn't bothered by this though, and they leave the room to let Yurika get some sleep. Ichigo admits how she had been hoping to talk to Kaede, and brings up her earlier concerns over what Mizuki said earlier. She mentions how everyone else has given their own futures some thought, but she has no idea and it left her feeling lonely.

In hopes of cheering her up, Kaede decides to tell her about "American Aikatsu". Ichigo is amazed, but Kaede points out how quickly it can all come an end, and before you know it, you're back to being a nobody on the streets. She goes on to mention that everyone assumes she never worries about anything, given how comes from wealth and has been on small idol programs since she was little. People think she's a girl whose never worked a day in her life, but if that was true she would have never become an idol to begin with; It was seeing so many people trying to do this that inspired her. All of her rich friends found her to be crazy and claimed she would have a happy life just sitting around not having to work, but Kaede believed in her own abilities and that was how she was able to stand on stage. She tells Ichigo that whether she is alone or with her friends, she has to keep believing in herself and she will never feel lonely or scared.

The following day, the girls all go out for laps around the boat- with the exception of the miserable Yurika, being surrounded by the sunlight. Everyone watches the girls while they exercise, then they all sit down for some breakfast, with everyone delighted and enjoying their time bonding with their fans. Including a cute little girl who runs off after she expresses interest in becoming an idol like Ichigo.

It's then Mizuki leaves suddenly, but none of her fans seem to be saddened by this, rather amazed by her beauty as she takes off. She sees Sakura and Otome with their fans, while Yurika leads her own fans around the room to an appropriate location. It's then Ran and Aoi grab Ichigo and inform her that it's time for the dance session.

Back at the main part of the boat, Mizuki informs everyone that they will be focusing on the choreography for their new medley. When Ran asks who will be leading the lesson, the girls find a pirate has come by. But it's only Johnny in costume, and he invites the fans to come and join them.

Upon finishing, Mizuki announces that now all that remains is the actual performance. Ichigo mentions that she finally understands what Mizuki had been saying the day before, she wanted everyone to do everything individually in order to connect to their fans, which made them feel closer to the group and in turn love them more. She stopped to think about everything they have done this summer and realizes how amazing everyone in the group truly is because of this. Mizuki also mentions that she wanted everyone to take back everything they have learned in this time.

With that, the girls share a final cheer and prepare for their performance, appearing on stage shortly after to perform "Hirari/Hitori/Kirari".

After finishing, everyone stands by and watches as a fireworks display starts. They give a final speech before the fans and soon arrive back on shore. Mizuki, Yurika, and Kaede take off as Tristar again, while the remaining five board the van and leave. 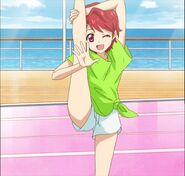 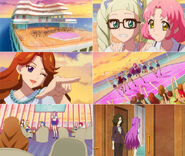