Mizuki decides to hold an audition at Starlight Academy in search of two partners to form a new idol unit. But as the numbers of contestants lower- a sudden surprise may decrease Ichigo and her friends chances.

Ichigo and Mizuki have just finished a performance and thank the audience for watching as Mizuki turns to her to say that she wants her as her partner. Ichigo is delighted and quickly accepts- only to suddenly wake up and realize she was dreaming.

Aoi runs over and shakes her away to reveal a big announcement that was just posted. An Elimination audition is going to be held to find members for Mizuki's brand new Idol unit. Ichigo can hardly believe this and expresses shock.

Due to the big events, Mizuki is asked to hold a press conference. She explains how the unit will include three members, herself included, and how the unit's name has already been decided as "Tristar". She is asked why she came up with this idea, and Mizuki explains how lately the school has become full of talented students. She explains the audition they are holded for this, and how she will choose two girls from them.

As this is going on, the students are watching the event happening on screen from the assembly hall. The conference ends as Ichigo, Ran, and Aoi express concern knowing that there is a chance two of them could get into the unit while one doesn't. However, they realize that they can't hold back and they mutually agree that there won't be any harsh feelings. Orihime then steps onto the stage and brings up this once-in-a-lifetime chance, telling everyone that while the road may be hard, she wants everyone to give it their all and prepare for this diffcult audition.

Every student is shown taking these words to heart, when they all hurriedly change and get to work training. Between crowding the dance teacher and voice trainer, the girls are surprised to find everyone already jogging in groups as they head to the track. Ichigo spots Otome and Sakura leading one group, and they even find Yurika running with them- though lagging behind while holding her parasol. They are joined by Hikari, who mentions surprise by Mizuki holding this event as she greets the girls. As Ran questions if she will be joining she assures that she isn't, because her fans prefer that she stays solo. She only came out to wish Ran luck, amazing Ichigo and Aoi in the process before she takes off.

Mizuki heads out into the hallway and begins to think back to when she was announced as Starlight Queen. She was so happy, but as she ran towards her goal of top idol she found herself alone at the top.

That evening the girls get together and chat about their intentions as a unit with Mizuki; such as Otome wishing to spread love all over the world, Yurika claims she and Mizuki would live eternally as a beautiful vampire clan, and Sakura mentions how nice it would be to spread tradition and glorify the world of Idols. Ichigo expresses confusion just then, asking if Mizuki has ever been in a team before- but Yurika, Ran, and Otome are unable to answer as she was a top idol by the time they entered the school. As far as they know, she hasn't been a group.

It's then Aoi finds information online about Mizuki, revealing that she actually has been. She had entered a group with her classmates, Ichika, Nino, and Sango. But her strength had been too much and overwhelmed them, causing them to fail the audition. Since then Mizuki has climbed the stairs of an Idol by herself. Ichigo is amazed by this, but she claims that she would feel lonely if she was in Mizuki's place. The girls become aware of this and start to agree with her, although they grow excited again by the prospect that she has suddenly reached out to them because she sees something in them. It's then Ichigo announces her decision to go for a run before it gets too late.

That evening, while on her way back to school, Mizuki thinks about her decision while Honoka asks if she is sure about doing this. She brings up how hard this will be, as not only are underclassmen participating- but also her classmates. It's a big responsibility, but Mizuki already knows that. As she thinks about how saddened her friends had been due to their failure, Mizuki finds herself assured that she can indeed handle it.

A week later, everyone heads to the area where the Audition will be held. As the several students admire the setup before them, they find that the entire event will be broadcasted live for audiences. The announcer explains how everything will work, and brings up how Mizuki has thought up each feature in the various trials and Johnny announces the start of the audition.

First the girls run down the path to find a large ramp they must climb over. Everyone begins to climb, with Yurika, Otome, and Sakura struggling as Ichigo, Ran, and Aoi get near the top. But before they can reach it, water begins to trickle down- revealed to be Naoto and the Director with a hose, before he is instructed to turn it up higher, sending a large group of the girls back down to the bottom of the ramp.

The girls are happy to see each other on the other side of the large wall- including the worn out Yurika. A "Golden Mizuki Chance" is announced afterwards, and the announcer explains that simply passing each trial does not mean one will actually pass the audition. It's to determine if one can stand on stage with Mizuki, and if she deems you unworthy, your efforts mean nothing. With that, the girls realize that starting at this point, the audition can be passed even before you complete the entire audition and she shares some words with the remaining girls before they move onto the next round after it's announced that nobody has passed yet.

This time the girls must walk over a balance bar residing over a large pool of water. Sakura is anxious and accidentally looks down, startling herself until Ran is able to help her. But suddenly, a volleyball goes wizzing by followed by several others. Naoto makes another remark as Asami suddenly falls off of the beam and into the water. She is surprised to find Michelle with her, and Michelle admits to jumping off because she refuses to stand without her dear friend.

As the girls remain standing, another Golden Mizuki Chance is announced and from her expression they can tell she isn't very impressed by them. Ichigo finds herself encouraged, and together everyone resumes. As this is going on Orihime makes conversation with Mizuki, asking her if she has noticed anyone yet.

The announcer reveals that thirty girls have passed, and they move onto the third stage; riding a rodeo horse while singing. If you're thrown off you lose. Seeing how anxious the girls are, Ichigo offers to go first and quickly finds herself very dizzy. As Ran mentions how strange Mizuki's train of thought is, each girl takes her turn and together, twenty of them pass on to the fourth round; where they will now be expected to crawl against a mat while a giant fan blows on them. Sakura finds herself growing weakened and Yurika sternly encourages her, reminding her how hard this battle is and if she wants to give up then she should. It's then the straps holding her parasol break, and she quickly grabs it before it can fly away. The others warn her to let go but Yurika refuses, earning her friends respect- along with Orihime's for staying in character.

With that, the remaining girls change and step on stage for the final portion of the audition. Johnny steps on stage to inform the girls that how this will go, and a girl asks Aoi if they can go to perform first. She agrees and they head off, only for her to realize they were Mizuki's classmates, Ichika, Sango, and Nino. The trio head down the hallway and share some words, bringing up how it's been two years and how they desire to show Mizuki how much they have improved since then. Aoi mentions this to Ichigo, and Johnny brings up how much effort they will put into the performance, and how he hopes for the same from them. After the trio, Sakura and Otome take their turn, followed by Ichigo, Aoi, and Ran, who change into their chosen coords and head on stage to perform "Take Me Higher".

After the performances, a final audition is announced, with Mizuki mentioning that while all of these girls managed to show her their best and that she will be bringing six of the eight girls to the final, final audition. As Otome and Sakura express disappointment in not passing, Mizuki explains her plans to the remaining six- only for a new voice to suddenly interrupt her. Everyone looks up in amazement to find a girl suddenly making their way towards them from a helicopter, having jumped out. As Ichigo expresses surprise, she notices the intense expression Mizuki is making while watching the girl.

3 girls from Mizuki's past in Tristar Audition

Mizuki and last girl 2 years ago 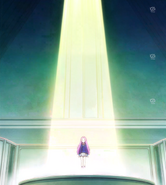 Retrieved from "https://aikatsu.fandom.com/wiki/Episode_33_-_Chance_%26_Try%E2%98%86?oldid=224573"
Community content is available under CC-BY-SA unless otherwise noted.