After the gang is chosen for a Newcomer Idol Event, Ichigo is requested by Asuka Amahane to appear in a commercial for their Mascot, Angely Bear. As she attempts to balance her clashing schedules she finds herself overwhelmed.

Ran and Ichigo are in the middle of a rock-paper-scissors tournament to decide on which brand everyone will be wearing for the upcoming audition. Yurika wants Ran to win since she does not like the sweet cuteness of Angely Sugar, but nobody else has any complaint. To their disappointment, Ichigo wins.

Meanwhile, at the official meeting office of Angely Sugar, a man announces that an up-and-coming idol will be the star of the next Angely Sugar commercial. They are about to go over possible candidates when Asuka voices that she thinks Ichigo would be the best choice since she fits so well with the star of the commercial.

During lunch, the girls discuss which coord each of them should wear. By now Ran has come to terms with it but Yurika tries to convince them that she could die if she wore something else other than her own brand- going on to throw blame at Ran for even having this idea to begin with. Ran voices how sure she is though, stating that by wearing the same brands they will work better together. The girls are interrupted by Johnny when he busts into the room to inform Ichigo that Orihime wants to speak to her. She has no idea why, but after he states that it is urgent she quickly flees for the office. Aoi expresses concern.

In the office, she informs Ichigo about the solo commercial for Angely Sugar. Ichigo is very surprised but eager as Johnny hands Ichigo the cutesy pink bear, the icon of Angely Sugar, Angely Bear. It is a present from Asuka, who chose Ichigo specifically. Johnny reveals that Asuka made Angely Bear for her child some years back, and Ichigo quickly agrees to do the commercial before she runs off to tell the others.

Aoi quickly realizes the scheduling conflict caused by the news, pointing out that the shoot will be going on almost every day after school ends until the concert. So Ichigo will not be able to train with them for it. Yurika suggests that they find a replacement, but they all want Ichigo to perform with them, causing her to reject the job offer until they point out how this is a very rare opportunity that would be more important than their performance. Ichigo claims that both of them are important though, so she will just find a way to do both things, with Aoi reminding her that besides photo work, she will also have interviews and other promotional work that will take too much time. Ichigo assures her concerned friends that it will be fine, and they offer to help see to it, deciding that breaks and evenings will be owned to them.

Later, Ichigo is at the train station on her way to the Angely Sugar meeting. She manages to locate the building and is amazed by how big and tall it is while stepping inside. She sees everyone waiting for her and they get to work discussing when to air the commercial before going over the storyboard. Ichigo compares the images to manga, and the man next to her explains that they do this to see how the commercial will go. Although, knowing how much she loves the brand, they also tell her that she can give opinions if she thinks anything needs to be changed.

Late in the evening, Ichigo comes by when the girls are in the middle of dance practice. She apologizes for being late and they ask if she listened to the song yet. Ichigo claims that she did during her ride back home and they reveal their intentions of having her sing the very first line of the song and as such, it is a big responsibility.

When morning comes Ichigo heads back to the office. She still seems to be fine and mentions her little brother Raichi while they chat about people in the commercial, then answers some questions.

The next day the group participates in an interview, answering questions until they call a break; but not before Aoi teases Yurika by claiming they will reveal her secret to them. She scolds Aoi and as soon as the interview ends, Ichigo takes off for the meeting- barely catching the train.

At school, Johnny runs in to inform Orihime of Ichigo's big schedule conflict. She doesn't seem to be concerned since they already discussed it. While it may be too much for her, Ichigo asked for them to allow it and as her school guardians it is their job to provide guidance and watch her; but that doesn't mean controlling what she does. Such things like this provide growth for an Idol.

As the group is about to begin dance class, Aoi gives the Angely bear to Otome and explains that Ichigo wanted her to hold onto it for now so that she wouldn't feel lonely. Yurika is annoyed with Ichigo blowing them of, but she can't help it since they're going to start shooting the commercial today. She makes an attempt to leave, claiming that without her they can't do anything, but Aoi is able to make her reconsider by claiming that Yurika is probably really sad without Ichigo.

On the commercial site, everyone is busy discussing some final touches while Ichigo comments on how much she likes the room display. The man explains that they even made a bunk bed for her, after recalling her mention of Raichi, then they explain how the commercial will run, with her as the protagonist. She is surprised to see that everything fits her so well, and they get to rehearsal. At first, she messes up and the kid playing her little brother explains that when a director wants to capture natural expressions he usually keeps the camera rolling without saying anything. Understanding, Ichigo simply smiles and brushes the little boy's hair before the director has them end the shot.

Ichigo returns later in the evening when Aoi hands her the interview transcript for the pamphlet. As she goes over it, Aoi begins to massage her leg, commenting on how stiff it is. Ichigo begins to relax, and in the process falls asleep as Ran comes by to talk. When she sees Ichigo is asleep, Aoi reminds her to be quiet and they let her have some time alone by going off to practice.

The next morning, Ichigo wakes up to find out she slept until five. She feels bad for missing their training, but Aoi tells her it is fine before she tries going back to sleep. She has also taken precautions by sending Ichigo some things through the Aikatsu phone, this being a video she wants her to watch later.

At the commercial location, Ichigo begins to watch the video the girls made. it. As it starts she is alarmed to see Johnny appear- only for Aoi to tell him he got too close. He apologizes and the camera pans over to the girls, where they reveal their plans of having Sakura take Ichigo's place while she is busy in order to get a run-through of the song and allow Ichigo to use her free time to practice the routine. Ichigo attempts to get a few minutes in, but before she can she is called to the shoot.

When night rolls along Ichigo shows up for practice. She expresses gratitude in having Sakura help out and she mentions how much she was able to learn from the video they made. The girls thank Sakura while they begin to stretch and she momentarily starts Kitaouji theater, claiming she just had to do it in order to help Ichigo. She sits out to watch the others practice but they notice Ichigo is too slow for them and ask Sakura to take her place for the time being, since she clearly needs to take a break. As this goes on, Yurika has begun to feel weak and chats with Otome, who gives her a box of tomato juice.

The girls continue to dance and Ichigo intensively watches them. During bed, she uses this time to go over everything when she is unable to sleep until Aoi comments that if she stays up too late she could get bags under her eyes. Not wanting to look tired, this convinces Ichigo to get some sleep.

The following day, everyone runs laps. As Ichigo is unable to be there, Ran has taken over to keep everyone going.

Meanwhile, Ichigo is busy on a swing set getting some filming done. But the director notices how absent-minded she seems to be at the moment and attempts to offer her some words of advice before calling a break after he spots some clouds appearing. Unknown to Ichigo, Asuka is watching and she approaches her to make conversation. She is very happy to see Ichigo and gives her the parasol she was using so that she protects her skin from UV rays, and while Ichigo is grateful, Asuka can tell that something is wrong and asks for Ichigo to confide in her.

Ichigo tells her about the special live idol event she was supposed to be doing and spending this time training, but because of the conflicting schedules, she has been spending all of her time doing this. She worries that she may be holding everyone back. Asuka brings up the Angely Bear she sent to Ichigo and asks if she has gotten it, and Ichigo mentions she has before thanking her, stating that she felt very happy. This makes Asuka happy and she starts to explain to Ichigo the background information behind Angely Bear. At first, it began as a toy for her child, but then she began to make them for friends and other family members. Soon she was getting Angely Bear fans all over the world and continued to make them. It is very meaningful to her, even after making so many of them. She continues to put her love and wish into every single bear she makes.

The reason she chose Ichigo for this was that she knew that she was the perfect girl to spread this wish to everyone who saw her. This revelation makes Ichigo very happy and they notice that the weather is beginning to clear up, so Ichigo runs over to the Director and asks him to resume work. To everyone's glee, she is able to perform much better and puts together a great shoot.

As Ichigo is on her way home, she calls the others to find out what's going on. But suddenly, a van pulls up and she finds out that they have come to get her. They begin to laugh as Ichigo asks them to help her catch up, and after she gets her seat belt on they go speeding down the road.

Eventually, the day of the performance comes. Asuka and her Gardener have set up the computer so that they could watch as everyone begins to gather at the location of the performance. Ichigo is nervous but with her friends' support they share a cheer before they go to change into their coords and appear on stage and perform "Fashion Check!".

After the performance, the girls gather to watch Ichigo's commercial as the episode comes to an end. 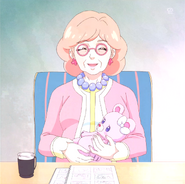