Episode 28 - Mizuki and A Soft-Shelled Turtle

Struggling with doubts as they celebrate making it into the semi-finals, Ichigo, Aoi, and Ran learn more about Mizuki and her brand, and they take up indivisualized training in hopes of improving themselves.

The girls celebrate Ichigo, Ran, and Aoi's semi-final status in the cafeteria and they sit down together to enjoy their break. They wish the trio luck and the girls are happy knowing they have their support, and they promise to do their best.

That evening Ichigo asks if Aoi is still awake. When she confirms that she is, she brings up how she is too nervous to sleep. The girls are surprised when Ran suddenly stops by with her sleeping items, and Aoi asks if they are going to have a sleepover. She is delighted as Ran confirms being unable to sleep as well and they have some drinks while Aoi celebrates the pictures she took of Ran- much to her embarrassment. It's then Aoi suggests they do some research on Mizuki to pass the time, and she takes out the "Monthly Mizuki" magazine. The trio get comfortable and begin looking at it, admiring how beautiful Mizuki looks in casual clothing and recommending sweets; until Ran wonders if this will actually help them or not. They try to focus while admiring her beautiful new brand, Love Queen; but while describing it Ichigo keeps getting distracted by food.

It's then Aoi remarks on the difference between the moon and a soft-shelled turtle, causing Ichigo to bring up what she knows about them. Aoi confirms that she isn't wrong, but that isn't why they get compared; it's the fact that despite sharing the same size, they have nothing in common. Ran then points out that this means while they are Idols, they cannot be compared to Mizuki. With that thought the girls resume research until the morning hours, when they are shown to have all fell asleep.

The girls awaken and quickly start training through various things until they call a break. As Ichigo lays around and Ran gets a drink, Aoi reviews the Mizuki magazine and she brings up how an article within in mentions that an Idol should focus on improving her strengths. Ichigo and Ran agree and with that she decides to take off and do more research on past the Fresh Girls Cups. Ran follows and decides to perfect her walking, as she believes this will improve her performance and she exchanges words with Ichigo before taking off.

At the library Aoi writes down everything she is able to learn; such as saving energy for the last round, while Ran is shown working on her walking technique by balancing books.

While this goes on Ichigo feels defeat after being unable to think of what she could do for her personal training. She comes across Naoto and expresses her disappointment until he mentions that instead of giving up and accepting defeat, she should set her sights on her goal and run to it. Ichigo takes him literally and thanks him before leaving with a thick gust of wind following her as she runs to the fountain. She knows that she may be a soft-shell turtle now but someday she will be able to reach Mizuki. She will continue to climb higher and higher if it means getting even one step closer to her.

When the day arrives for the girls to compete in the semi-finals, Johnny explains how the rules aren't changing this time. He reminds them about the timing, and how they can't let their guards down. It's then Mizuki walks into the room and joins them, wishing the girls luck before they change and get back on stage. The girls perform their appeals perfectly timed, but upon ending the song they reveal that only Ichigo will be moving forward. Initially she worries that Aoi and Ran are upset with her, but they assure her it's fine. While they may be frustrated by the loss, they are happy for her just the same.

That evening, Orihime and Johnny in her office. Neither are surprised that she managed to rank out of the three, and they wonder if Mizuki will finally find her perfect partner.

Meanwhile, Mizuki remains awake, changed for bed but unable to sleep. She sits down and watches the performance from earlier and focuses on Ichigo- her opponent for the finals.

Aoi and Ran promise to help Ichigo until the final takes place earlier. Before they get to running they recall what led to this meeting, with Ichigo revealing what she did as personal training to her friends. They were surprised by this, but this passes while citing what caused them to fail. Ran explains that she had become too relaxed focusing on her modeling; as well as her friends, which she denies, and Aoi mentions how she was stressing out over saving energy. They tell Ichigo to try her best and she agrees, so wih that they get to work with their run. Ichigo confesses that it is because of her friends that she can keep running, and they help her throughout the day by having fun, training, playing a human wack-a-mole, and jumping from a large rope and landing on the mark where they stand.

As the final arrives Ichigo heads inside to find Mizuki and Johnny waiting for her. Before they change, she goes on to announce how this has been an ulterior motive for her to find a partner to stand on stage with her, and how this partner could very well be Ichigo. She tells her to give it her all, and Ichigo mentions that despite this there is a big difference- with her being a soft-shelled turtle and all. Mizuki giggles at this explanation and reveals her Love Queen cards she plans to use, and she tells Ichigo to wear her own Premium cards as well. She agrees and they run off to change, reappearing on stage to perform for the final time in this Cup.

As the girls head back to the dorms Aoi and Ran worry that Ichigo may feel down because she came in second place. However she is just happy it's over and done with. She thanks them before saying that Mizuki really was the best.

As this is going on Orihime and Johnny discuss how things went while re-watching the performance. They chat about how well the girls did, and Orihime brings up that all things considered- it was probably Mizuki who became the most inspired and motivated.

That night, Ichigo gets out of bed and prepares to step outside. Aoi hears her and gets up, writing down a note expressing her desire for Ichigo to confide in her if she should ever feel the need to, then she returns to bed.

Ichigo heads out to the Gazebo, deep in thought when she approaches Mizuki. Mizuki admits that she was unable to sleep as well, and she brings up the metaphor Ichigo used earlier, saying that while Ichigo isn't ready to become her partner just yet, she may be closer then she thinks; in fact she might be able to become the sun. These words touch Ichigo as she watches her rival head off.

Yurika congratulates Ichigo, Aoi, and Ran for making it to the semi-finals. 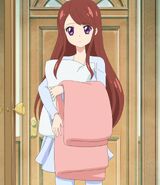 Aoi seen with her hair down for the first time. 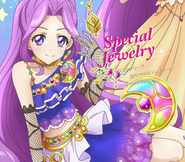 In a magazine, Mizuki is shown with her new brand: Love Queen.