As a new school year arrives Ichigo is tasked with mentoring Sakura Kitaoji, a freshman struggling to get her twin brother, Sakon to understand her dream.

It is the day of Starlight Academy's Entrance Ceremony and Johnny is very excited. This reminds Aoi that it has been six months since she and Ichigo enrolled at Starlight Academy as he goes on to explain that because the girls are now Second Year Students, they will be helping the brand new First Years.

After class, the girls go to meet their idol freshmen. While Aoi and Ran are quickly able to locate theirs, Ichigo can only watch how happy everyone looks as she tries to find her own. She recalls how she and Aoi felt when they first joined, and remembers the first time she personally interacted with Mizuki, going on to realize that she is now a third year. This makes her wonder if she has to be as good as Mizuki was at this point in her idol lessons, but her mood is quick to change as a black limo appears.

A girl with pink hair steps out, followed by a male who resembles her with orange hair. Ichigo realizes this is the girl she was partnered with, but seeing the girl and boy begin to bicker, she decides to give them space and try again after the Entrance Ceremony ends.

The ceremony comes by very quickly and Johnny tries to make a big production of it until recalling Orihime is standing nearby. As everyone sits in the audience before him, Mizuki notices that many of the first years are staring at her. Ichigo points out to Aoi who her partner is- and Aoi is amazed to see that Ichigo has been given Sakura Kitaoji, but before she can explain who she is they are interrupted by the speech as Johnny announces that a special Fashion Show will be held strictly for the new students. The winner will get her picture on the cover of the new students directory.

Once the ceremony ends, Ichigo attempts to locate Sakura and finds her speaking to Mizuki. She is very surprised to see them speaking casually and happens to overhear a few girls nearby mention her too, which causes Ichigo to wonder who her freshman is as Aoi suddenly appears. She brings up the information she was unable to earlier, explaining that Mizuki learned traditional Japanese dance from Sakura's grandfather, which is how they know each other. She also mentions the long history of Kabuki Acting in the Kitaoji family, even saying that Sakura learned it as well; she is also very popular in various other media.

As Ichigo continues to watch Sakura, Mizuki takes her leave and she attempts speaking to her again, introducing herself as her mentor. Sakura is delighted by this, but Ichigo is caught off guard by how formal she is. As Sakura's brother rejoins her, Aoi explains that Sakon is her twin and they can only helplessly listen as he scolds Sakura for agreeing to live in the dorms, which he recently found out from the staff. She admits to keeping it a secret since she knew he would be angry, and she goes on to ask why he is unable to approve of her dreams when everyone else has. Sakon claims that he is the only one who knows Sakura the best, and he claims that she should just quit and return home. Ichigo tries to ask why he wants Sakura to quit, but he tells her to mind her own business since it's between them- but Ichigo refuses, stating that as Sakura's mentor she wants to be involved. Sakon claims that she wouldn't be able to live on her own, and whether she likes it or not she still needs him.

Suddenly, he breaks out into Kitaouji Theater, explaining how fragile Sakura is, and how she has always stood behind him. He has protected her since birth, and he has promised to always protect her at the cost of his own life. Ichigo is left pleased by such words- but Aoi feels this might be unhealthy. The twins resume arguing before Sakon asks why Sakura even wants to become an idol to begin with. She is unsure of how to respond, then claims that no matter what she will become an idol. She refuses to go home, so he claims that if this is what she really wants then he will be disowning her as a sister, and after seeing that this has no effect on her he storms off. Ichigo tries to convince him to stay, but Aoi holds her back.

Sakura changes the subject by asking about the Fashion Show coming up and they decide to do some training- where Sakura is shown to have a wonderful models walk and she brings up the coord she plans to wear. Ichigo feels it suits her perfectly and they begin to go over other details, like her Aikatsu phone and ID. Sakura is very happy to have passed the exam and she expresses how it felt to touch the ID and phone for the first time before going on to ask Ichigo why she became an Idol. Ichigo explains how she watched Mizuki perform and it inspired her. She goes on to tell Sakura that she can ask her anything, but when Sakura can't think of anything, Ichigo goes on to speak with her friends to find them saying goodbye to their own freshmen.

In the dorms, Ichigo watches as Aoi tries to think of some advice to give to her partner regarding which coord to wear. Ichigo comments on how good of a mentor Aoi is, then admits that while she really likes Sakura, she is worried that she isn't a very good teacher. Aoi suggests to Ichigo that she just tries to do what she always does, but she isn't entirely sure of what that exactly is.

The next day, everyone has been training with their partners to get them ready for the fashion show the day after. After Sakura notices how tired Ichigo is, she asks if they should take a break and apologizes for taking Ichigo's time like this; but Ichigo insists it is fine, complimenting Sakura's stamina. Besides daily jogs, she has also been singing, acting, dancing, and working on coordination. Ichigo is very impressed and Sakura mentions that she really wants to become an idol, causing her to ask why. She is surprised when Sakura suddenly busts into her own Kitaouji Theater segment.

Sakura explains that she wanted to start her idol life the moment she saw Mizuki perform during a festival. For the course of time she struggled to sleep as she couldn't get it off her mind, and one day she made the decision that she too wished to become an idol.

As Ichigo comments on this, two students come by to do some training and the girls overhear them voice their concerns over how Sakura will probably win. As they wonder what she will be doing for the show, Ichigo notices how sad Sakura looks- but she quickly feigns happiness, only to excuse herself to resume preparations. Ichigo feels bad but says nothing- unsure of how to respond as she makes her way out to the Gazebo.

There, Mizuki comes by to ask her why she is there, and Ichigo explains her concerns. She feels helpless for being unable to do as much as the other mentors, and because of how much Mizuki has taught her, she wishes to give back. Mizuki goes on to say that even if Ichigo is struggling, she is trying very hard to be a good teacher for Sakura, and her feelings may be enough for now. It's then Ichigo recalls how troubled Sakura has been over her separation from her twin, and she realizes that despite being so close to him, she is sill trying to stand on her own two feet. Inspired, Ichigo gets up and thanks Mizuki before running off.

Later that night, Sakura is moping in the corner of her room while her roommate, Satsuki, listens to music. She happens to notice that Ichigo sent her a text directing her to look outside and she gets up to find Ichigo and a bunch of bright lights, shining on the vibrant sakura trees some feet away. From where she stands, Ichigo tells Sakura that she isn't alone, even if she feels like she is now. She tells her that she will make a bunch of new friends, and everyone will be there to support her. She wants Sakura to put on a great performance and promises to always be there for her.

Such words touch Sakura as Naoto, the one responsible for setting up all of the lights makes a complaint over Ichigo hassling him to help her like this.

The following day, Ichigo checks to make sure Sakura has everything before heading off into the audience, where she happens to notice Sakon waiting with annoyance. Sakura heads into the changing area and inserts her cards, changing into her school coord and dancing to "Happiness on the same Earth".

Sakura is left feeling saddened after it is revealed that Kiriko, Ran's freshman won. However, she is happy to have been on stage, and to her surprise she finds out that Sakon stayed to watch- revealing that Ichigo convinced him to return. He remarks on how much Sakura has grown in this time, and voices how well she did on her own. Sakura brings up that she isn't on her own though, because she has Ichigo on her side. She asks her to remain close to her, and Ichigo agrees, happy to see the twins on good terms again. She attempts to imitate their dramatic speech behavior- but they end up laughing at her. 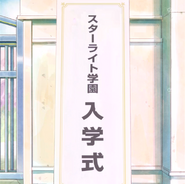 Retrieved from "https://aikatsu.fandom.com/wiki/Episode_26_-_The_Season_of_Sakura?oldid=224471"
Community content is available under CC-BY-SA unless otherwise noted.